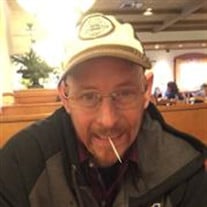 Adam Jeremy Davis was born on May 9, 1977 in San Bernardino, California to parents Jack Charles Davis and Suzette Marie (Pinaire) Davis. He was born a minute before his twin brother Jason Matthew. The twins were born 16 months after their older brother Jack and 3 1/2 years before their younger sister Kathleen. The family lived in Ontario, California, and a brief time in Vancouver, Washington before moving to the high desert in 1984. He attended school in the Victor Elementary School District and the Victor Valley Union High School District. He was in the graduating class of 1995. He attended Victor Valley College. Adam lived a life that presented many challenges and yet remained one of kindest, gentle souls to walk the earth. One of the most challenging times for him came in 6th grade, when he was burned with 3rd degree burns on approximately 25% of his body. Almost everything not burned was used for graft sites. For years, he was treated through Shriners Hospital. He endured painful surgeries, physical therapy, and a tremendous amount of gawking, bullying and stares for many years. Once in a public pool, the other kids all got out of the pool when he went in. When it happened, he took the time to talk about his burns, allowed them to ask questions and touch his scars and made friends from that point on. He told many of us throughout his life he would not have changed a thing in his life, because it had made him who he was. Adam attended Champ Camp as a child through the Alissa Ann Ruch Burn Foundation. It was his first time going to camp and he never stopped going. He went back as he got older to help with children, who like himself had been burned. Many children, as Adam, found solace in a place where he was not looked at for his burns, but for who he was. He returned just recently, with his wife Nancy, who after going fully understood what drew Adam to return every chance he could. One of Adam's several interests in life was cooking. He enjoyed cooking for himself but one of his greatest joys was cooking for others. Anyone who was ever treated to a meal prepared by him, never forgot how amazing the food was and how full they were when they left. One of his biggest legacies will always be his Jerky. Whatever amount he made, would be eaten and/or sold out of within days. Another great interest for Adam throughout his life was NHRA. He and his brother Jason followed their father Jack's love of the sport. Adam actually worked for a time with NHRA legend John Force. He and Jason followed their father's lead and could tear apart and rebuild engines, troubleshoot vehicle issues and virtually work it into a way of life. He eventually became a big rig driver and drove across the country many, many times over. Just as Adam followed his father's love of NHRA, he picked up the love of bowling from his mother Suzette (Suzie). Adam loved bowling and bowled his first 300 game in a very tough house to do so. He really enjoyed shooting pool and just overall loved competition sports and hobbies. Adam married his second wife Nancy Mayo Davis in 2010 after being together for almost 7 years. They lived in the Victor Vally until a move for work brought them to Mandan, North Dakota. Although she had always lived in California, she joined him in the new quest...loving it there now. He fully embraced being a stepdad to Nancy's two children Jeff and Alicia and was thrilled to become a "grandpa" to Alicia's son Gavin born in May 2015. In 2003, Adam lost his daughter Sydney Cheyenne Davis at birth. In the beginning of this year, he found out he had another daughter he had never known. After talking and texting, they finally had a chance to meet. He and Ariel had a wonderful, though much too brief, chance before his death to get to know and love one another. In 2009, Adam's father Jack died. It was a very difficult time for him and his siblings but opened the door to a relationship with his 2 sisters from his dad's first marriage, Ruthie and Sherry. He loved them and talked and/or got together with them as often as possible. Last October, Adam's youngest sister Kathleen (Kat) died suddenly leaving Adam, her entire family and all who knew her beyond heartbroken. On May 1st, Adam was driving his truck through Utah when he pulled to the side and called 911. He called Nancy, his brother Jason and his mother right before being airlifted to St. George, Utah. He had suffered a massive heart attack. After fighting hard for his life for 11 days in ICU, Adam lost the fight on the morning of May 12th, 2016. He is now with his father Jack, his sister "Kat" and daughter Sydney. In life when asked how he was, he would reply..."Just another day in Paradise" ... Now he truly is... He is survived by his wife Nancy Mayo Davis of Mandan, North Dakota; his mother Suzette Marie (Pinaire) Davis of Apple Valley, CA,; his brothers Jack Alfred Charles Davis of Ontario, CA; Jason Matthew Davis of Hesperia, CA; sisters Ruth Ann Arrellano of Rancho Cucamonga, CA; Sherry Totaro of Lancaster, CA; daughter Ariel Jacks of Oregon; stepdaughter Alicia Cates of Mandan, North Dakota; stepson Jeffrey Tucker of Saugus, CA; maternal Grandmother Joan Reece of Las Vegas, NV; and a multitude of aunts, uncles, cousins, nephews, nieces and friends who love and miss him so very much.

Adam Jeremy Davis was born on May 9, 1977 in San Bernardino, California to parents Jack Charles Davis and Suzette Marie (Pinaire) Davis. He was born a minute before his twin brother Jason Matthew. The twins were born 16 months after their older... View Obituary & Service Information

The family of Adam Jeremy Davis created this Life Tributes page to make it easy to share your memories.

Send flowers to the Davis family.