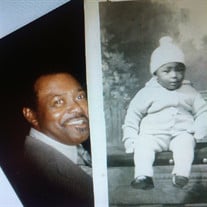 Alton (&#8220;Al &#8220;) was born November 7, 1937 to the late Forest and Elnora Ethridge in Winnfield Louisiana. Departed this life on January 22, 2016. He was preceded in death by his two sisters, Milvie and Myrtle, and one brother James. He... View Obituary & Service Information

The family of Alton Ethridge created this Life Tributes page to make it easy to share your memories.

Send flowers to the Ethridge family.