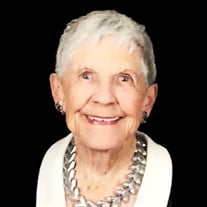 Barbara Ann Bell Hove went home to her beloved Lord at the age of 92. Barbara was born on June 13, 1927 in Wadena, Minnesota to John A. Bell and Marguerite Laura Bell. She attended elementary and high school in Pasadena. Barbara attended Pasadena Presbyterian Church. After attending Occidental College for two years, Barbara transferred to and graduated from University of California at Berkeley in 1949 with a Bachelor’s Degree of Arts majoring in Social Welfare. As a student Barbara joined Pi Beta Phi and remained an Alumnus throughout her life. After graduation Barbara went to work for San Bernardino County as a social worker. On July 7, 1951 she married Robert Edward Hove and in 1953 they had a son Corbett and moved in 1954 from Big Bear to Apple Valley purchasing a house on Jicarilla Road, her first. In 1956 their 2 nd son Jonathan was born. Barbara knew when she met Bob that he was the one. Bob’s first car was given him by his father in 1940 when he was 16, a 1935 Ford coupe with a rumble seat (in which Barbara hid when Bob took another girl on a date!). Their favorite car was a 1951 Studebaker Champion convertible – Bob and Barbara honeymooned in it and it had been used in the 1951 Rose Parade. In 1955 Barbara and Bob purchased a 6-month old small aggregate and ready-mix company in Lucerne Valley called Hi-Grade Materials Co. During the ensuing years the company expanded throughout the desert area to include thirteen batch sites and six mining sites in the Victor Valley, Antelope Valley, Morongo Valley, Fort Irwin, Indio and Thousand Palms. In 1972 Barbara and Bob established Endura Steel, Inc., a metals distribution business. Distribution centers are in the Victor Valley, Antelope Valley, Coachella Valley and Western Arizona. A steel fabrication company, Smith Ironworks and Manufacturing Co., was formed by Bob in 1981 and is licensed in California, Arizona and Nevada. Barbara was a visible leader in the Victor Valley. Barbara and Bob loved to travel and they visited most of the world for the sights, history, and, well the food. In 1979 Barbara booked them on a 72 day trip around the world which included 43 different airplanes. They were on vacation in East Berlin when it was announced the wall would come down! Two other favorite trips were boating and camping (amongst many deadly snakes, spiders and piranhas) along the Amazon River; and hanging out with Emperor penguins on Antarctica. Barbara planned and then invited Bob along with Linda and Jon on a fascinating Russian river boat cruise from Moscow to St. Petersburg. In 1942 Barbara became a member of the Pasadena American Heart Association. Barbara conceptualized and was a founding board member of the Apple Valley Christian Care Center and was instrumental in fundraising efforts for the building. She was a “Bull Dog” (per Reverend Bill Hansen) in bringing the facility to life. She was a member of Church of the Valley since 1954 and started the Laubach Ways to Reading Ministry. Barbara grew the ministry to 100 workers with branches in Apple Valley, Victorville, Hesperia, and Barstow and at the Summit Valley School. Barbara became an elder of the church and was a member of the session. Barbara lived her life as a celebration of her faith, for which she was never apologetic. Barbara along with her good friend Grace Miles was a founder of Prairie Schooners at COV. Prairie Schooners put on melodramas at COV which Barbara and Grace produced. Prairie Schooners became “Voyagers”, which to today holds the COV semi-annual rummage sale. Barbara managed the rummage sales for decades. Barbara co-founded with Fran Alcorn and Helen Black the Apple Valley P.E.O. Chapter in 1965. She was an avid reader and enjoyed murder mysteries. She also enjoyed bird watching and visited many areas where birds hung out. Barbara is survived by her son, Corbett and his wife Jenny of Escondido; his son Jonathan and his wife Linda of Apple Valley and his grandchildren Patrick, Kalin, Harrison, Hunter and great- grandchildren, Cronos, Isla and Locklan. Barbara’s service shall be held in the Church of the Valley Sanctuary, 14933 Wa-Ki-Ta Road, Apple Valley, CA 92307 at 2:00 PM on Friday, July 26, 2019. The family is requesting that in lieu of flowers, donations may be made in Barbara’s memory to St. Jude Children’s Research Hospital (www.stjude.org).

Barbara Ann Bell Hove went home to her beloved Lord at the age of 92. Barbara was born on June 13, 1927 in Wadena, Minnesota to John A. Bell and Marguerite Laura Bell. She attended elementary and high school in Pasadena. Barbara attended Pasadena... View Obituary & Service Information

The family of Barbara Ann Hove created this Life Tributes page to make it easy to share your memories.

Barbara Ann Bell Hove went home to her beloved Lord at the age...

Send flowers to the Hove family.