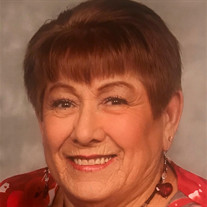 Luz Berthila “Bertha” Parker, 75, loving wife, sister, mother and grandmother went to be with our Lord Jesus on Friday, November 2, 2018. She was born on February 21, 1943 in Sinaloa, Mexico and came to the United States as a young girl where she continued school and became independent. She had her first son Alex at 22 years old and raised him as a single mother for 7 years until she met the love of her life Ted. They were married for 46 years and had two children together TJ & Cristy. She lived most of her life in California and retired from Bassett Unified School District where she became mom to many other students. In recent years she was living in Bullhead City, AZ and had made many friends there. When her husband himself became ill 4 years ago she devoted herself to caring for him. Although she became a U.S. citizen, her love for her mexican heritage never left her. She visited her family often and had even considered returning to live in Mexicali. She will always be remembered for her love of her family, singing mexican music and cooking large amounts of food, especially tamales and pozole around the holidays. She is preceded in death by her parents Francisco & Cristina Gallardo, siblings Clementina, Leonel, Pedro (Pia), Francisco (Pancho), & Trinita. Survivors include her loving & devoted husband Theodore Parker; her sister Eva Villavicencio; sons Alex Gallardo and wife Susie , TJ Parker and wife Dianna, daughter Cristy Chewning and husband Chris and 10 grandchildren; AJ, Mido, Devin, Hailey, Parker, Patrick, Chris, Payton, Eva, Bella and several extended children, grandchildren, nieces and nephews.

The family of Mrs Berthila Parker created this Life Tributes page to make it easy to share your memories.

Send flowers to the Parker family.