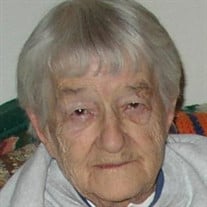 Beth L Drake October 31, 1922 – October 10, 2019 Beth Louise Clark Beauchamp Drake passed away in Apple Valley, CA on October 10, 2019, 21 days before her 97th birthday. Beth was born on October 31, 1922 on a farm in Osborne, Kansas to Raymond C. and Helen E. (Storer) Clark. In 1942 the family moved to Orange County in California in search of work and a better living. World War II was still being waged. Beth went to work in pilot publications at the Santa Ana Air Base where cadets were processed for flight training. As the war wound down, the base was closed and she was transferred to the Navy section of El Toro Base in El Toro, CA. She became engaged to John Beauchamp and they were married in November 1946. Her next job was with Hunts Foods in Fullerton. Four children were born to Beth and John before his sudden death in 1954. Having just moved to Tustin, CA Beth was faced with raising 4 children, no job, and no driver’s license. Two of her grand daughters described their Grandma Beth as having fortitude – courage in pain and adversity. She found a waitress job at the Christian’s Hut in Balboa, got her drivers license, and her parents helped with the children. She really was an example of “the greatest generation.” Beth met and married Alfred (Al) Drake in 1957. She continued to work until their child was born in 1958. She earned household money by selling Avon and taking in ironing. During the years her children were growing up, she was active in the school PTO, serving as room mother and president. She was on election boards and quite often the voting poll would be in the family living room. She helped with Girl Scouts and Boy Scouts and was a Cub Scout den mother. She saw to it that the kids got to Sunday School. She loved Christmas and made sure it was a special day. She will always be known for overflowing Christmas stockings. Once Beth had two children in college, she went to work for the U.S. Postal Service in the late 1960’s. She left a legacy by writing her family history and the story of her life. In that she gives great detail of her time with the Post Office. Beth and Al stayed in Tustin until their retirement in the mid 1980’s. They built a home and moved to Apple Valley, CA. Not one to sit around, she tended trees and shrubs and willed them to flourish in the desert climate. There was always a fiction and a non-fiction book being read and quilts being made, knitting to be done. She kept lots of records and scrapbooks. Her civic mindedness did not end. She served on election boards and in the late 1980’s she was elected to the board of the Thunderbird Water District. Beth served on the board, and for many years as president, until her resignation in November of 2018 at the age of 96. She took the job seriously, knew the workings and history of the district and was valued for her work ethic, loyalty and dependability. Beth did not miss sending a birthday or anniversary card and her children, grandchildren, and great grandchildren could count on a birthday phone call. Her mind remained sharp as she physically began to fail. Just days before her death she mentioned to one of her daughters that she hadn’t been able to get cards off to 3 of her October grandchildren and to let them know they’d be late. Beth was preceded in death by her infant twin sister, Marie, her parents, sister Jean, brother Raymond, husband John and husband Alfred. She is survived by her sister, Shirley Sieglock, her five children – Chris Shuman (Bernard), Bette McIver, Ellen Hackbarth (Kevin), Allyn Beauchamp (Barbara), and Floyd Drake; her 6 grandchildren –Mark Beauchamp (Kristin), Philip Shuman (Michelle), David Beauchamp (Deborah), Laura Whear (Justin), Ashley Beauchamp, and Stephanie Abens (Tyler); and her 18 (with one on the way) great grandchildren; along with nieces and nephews. Arrangements are under the care of Sunset Hills Mortuary. Donations in memory of Beth L. Drake can be made to City of Hope, Attn: Giving, 1500 E. Duarte Rd., Duarte, CA 91010

The family of Beth Louise Drake created this Life Tributes page to make it easy to share your memories.

Send flowers to the Drake family.