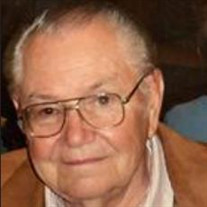 Bruce E. Berg October 4, 1928 December 21, 2019 Bruce E. Berg, 91, died on December 21, 2019 at his home in Apple Valley. He is now forever with Jesus, his Savior. Bruce was born in Bismarck, North Dakota on October 4, 1928 and was the oldest of three children born to Thorman G. Berg and Agnes Mary Grewer Sharkey. His family moved to California when Bruce was a boy, and he graduated from Monrovia High School in 1946. Sports were an important part of his life, and he made many good friends playing basketball and football in high school. Bruce joined the U.S. Army after high school and went to boot camp in Fort Knox, Kentucky. He shipped out to Seoul, South Korea in 1947 and was a member of the 69th Engineer Topographical Co., 24th Corp. Following his Army service, Bruce returned to Monrovia where he soon met and fell in love with Thelma Mae “Jeff” Jefferson. They married as soon as she finished high school in 1950 and spent 65 years together building a life and family they both cherished. They lived a full life together raising five children. The couple moved their family to Apple Valley in 1966 buying their dream home, a sprawling ranch style, adobe house with room in the backyard for many horses. Bruce had a great love for horses. He developed a knowledge of breeding, training and racing horses and eventually did it all. He, with his wife, Jeff, always by his side, spent about 20 years traveling to horse shows across the country. He could easily be found on the railing coaching his daughters. He served as president of the High Desert Appaloosa Club and was an active member of the Spotted Valley Appaloosa Club. Bruce spent many years coaching his sons in little league. He enjoyed taking his boat out on the Salton Sea and going on hunting trips. He could do a great jackknife off a diving board. He was known for providing a forever home to many horses, dogs, cats and even stray chickens. Of all the pets, his German Shepherd, Boots, had a special place in his heart and was often found under the kitchen table or at his side. Throughout his life, one of his special delights was dancing with his wife. Bruce worked for the Los Angeles Times for 35 years managing dealerships in El Sereno, La Mirada and Buena Park areas and eventually the High Desert dealership in 1965, which brought his family to Apple Valley. In 1989, Bruce and Jeff opened and operated Footprints Laundromat in Apple Valley. They later sold the laundromat and Bruce lovingly and determinedly cared for his wife through her struggle with Alzheimer’s Disease in her final years. Bruce was preceded in death by his wife, Thelma Mae “Jeff” Berg; his parents, Thorman G. Berg and Agnes Mary Grewer Sharkey; his brother, Mitchel Berg; his sister, Darya Ann Allen; and his sons-in-law, Gary Osborne and Andy Carlton. He is survived by his sons and daughters-in-law, Rikk and Kathy Berg of Apple Valley and Scott and Laura Berg of Rohnert Park; his daughters, Kelly Osborne and Christy Berg of Apple Valley and Tami Carlton of Lake Havasu, Ariz. He is also lovingly remembered by 13 grandchildren and 17 great-grandchildren. Funeral services will be held on Saturday, January 4, 2020. A viewing will be at 10 a.m. with a service to follow at 11 a.m. at The Church for Whosoever, 18628 Seneca Road in Apple Valley. A graveside service will follow at Sunset Hills Memorial Park, 24000 Waalew Road in Apple Valley.

The family of Bruce Ernest Berg created this Life Tributes page to make it easy to share your memories.

Send flowers to the Berg family.