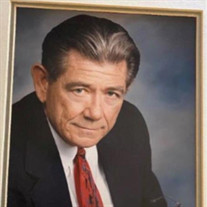 In Remembrance B. Gene Bristoll 1939 - 2022 Gene Bristoll, born on July 18, 1939, passed away after a long illness on April 9, 2022 at his home in Apple Valley. His loving wife Linda was by his side. Gene moved from Ohio at the age of 7 to California, where he completed his education. Gene was a member of the Air Force Reserves. He received his undergraduate degree at the University of Redlands and received his juris doctorate degree from the University of La Verne. He was admitted to the California State Bar in June 1975. Gene started his career as a probation officer and became a Deputy District Attorney in San Bernardino County after finishing law school. Later he started his own firm, practicing criminal defense and family law. Gene was a member of the Capital Defense Panel and was noted for his expertise in criminal defense trying capital cases. Many members of the legal community will remember Gene for his willingness to share his knowledge and expertise with them. Gene’s legal career spanned over 46 years. Gene enjoyed a well-lived life. He and his wife Linda travelled extensively. Their adventures included Europe, particularly Denmark, Alaska, The Baltic, the Panama Canal, and South and Central America. Gene was known to pack a bottle of Port and cigars in his suitcase and proudly carry them around the cruise ship to the pleasure of his friends. His nicknames were Buford and Buffie, compliments of his dear friend, the Hon. Steve Ashworth. He refused to eat at a restaurant that did not serve coffee and had coffee mugs in various chambers in Victorville. ﻿In his life, Gene was the source of many pleasant memories that will comfort his family and friends in the times to come. Gene is survived by his wife, Linda Forrest; his sister Karen Scheppers; his niece Tracie and her husband Damon Andreski; his great-nephew Devin Andreski; and his loyal assistant and family friend Joyce Brown. Gene Bristoll, known for his generous nature and wonderfully dry sense of humor, will be missed by colleagues, bench officers, court employees and all who knew him. Services are pending. A celebration of life will be held at a later date. Cards may be sent to the family in care of the law office of Brandon A. Wood, 14338 Park Ave., #3, Victorville, CA 92392.

The family of BURL GENE BRISTOLL created this Life Tributes page to make it easy to share your memories.

Send flowers to the BRISTOLL family.