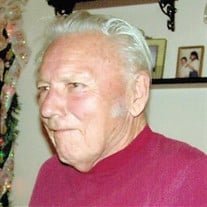 Charles Lee Holland died on January 3, 2019 at the age of 85. He was born in Centerton Arkansas and was a resident of Apple Valley, California. He served in the Army from 1954 - 1956. Charles has 4 children; Terri Lopez, Danny Holland, Janette... View Obituary & Service Information

The family of Charles Lee Holland created this Life Tributes page to make it easy to share your memories.

Send flowers to the Holland family.