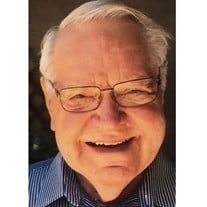 Charles David Lomax, age 86, passed away on February 23, 2019, at 5:35 pm in his home in Apple Valley, California surrounded by his loved ones. Chuck was born on September 26, 1932, in Portland, Oregon during the Great Depression. He developed a strong work ethic at a young age by selling household wares door to door and passed this attribute to his children. His positive outlook on life and fun character attracted many friends of all ages and backgrounds. He married the beautiful Edith Ray Kidd on September 10, 1953, in the Logan, Utah Temple. Their marriage spanned over 65 years. Chuck shared often the love and loyalty he felt for his wife, and together they had nine children. After he married Edith, he graduated from Brigham Young University and joined the Air Force, living in multiple states. Receiving an honorable discharge from the Air Force, he worked for Industrial Air Products and flew for the Air National Guard. During this time, he earned membership in the unique Caterpillar Club—those who were forced to eject from their aircraft in an emergency. At age 33 years, he joined American Airlines as a pilot, and frequently shared, “I can’t believe they pay me to fly.” Chuck accepted the esteemed assignment, Chief Pilot at the Los Angeles base and met with management regularly. According to policy, Chuck retired as a Captain at age 60 years from American Airlines. However, he continued to work for American and later McDonnell Douglas and Boeing for 17 years testing aircraft and training pilots. Chuck served over five years as Bishop for the Orange 4th Ward in the Orange California Stake of the Church of Jesus Christ of Latter-Day Saints. During this time, he cared for the spiritual and physical needs of the people in his congregation. Other service included working in the Los Angeles and Redland Temples for over 18 years. We will remember our Dad and Grandpa Chuck for his thrilling stories, contagious laughter, adventurous driving lessons with children and grandchildren, generosity towards family and others, enjoyment of a good joke or story, genuine interactions with people, and well-known designation as the “Hero.” His life made the world a better place, and he will be missed. He is preceded in death by his parents, David and Marjorie Lomax. He is survived by his wife, Edith, and sisters, Ellen Slack, Nadine Partridge, and nine children, Randel (Annette) Lomax, Kristy (Kevin) Baron, Mark (Jeanette) Lomax, Kendall (Dennis) Bledsoe, Heather (Kent) Johnson, Stuart Lomax, Rachel (Matt) Anderson, Elise (Kyle) Palmer, and Autumn (Jim) Asper along with 38 grandchildren, 37 great-grandchildren, and 3 great-great-grandchildren. A Funeral Service will be held at 9:00 AM on Saturday, March 2, 2019, at the Church of Jesus Christ of Latter-Day Saints, 12242 Navajo Road, Apple Valley, CA 92308, with a viewing beginning at 8:15. Burial will be immediately following the service at Sunset Hills Memorial Park in Apple Valley.

Charles David Lomax, age 86, passed away on February 23, 2019, at 5:35 pm in his home in Apple Valley, California surrounded by his loved ones. Chuck was born on September 26, 1932, in Portland, Oregon during the Great Depression. He developed... View Obituary & Service Information

The family of Charles David Lomax created this Life Tributes page to make it easy to share your memories.

Send flowers to the Lomax family.