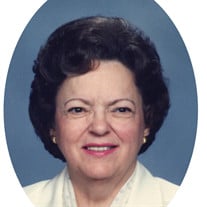 Long-time Apple Valley resident Charlotte Elaine Richey left to join her husband in Heaven on Saturday night, June 22, 2019. Charlotte was born February 3, 1926 in Centerville, Iowa to parents Charles and Elsie (See) DePuy. She graduated from Centerville High School early and went to secretarial school, following which she went to Dayton, Ohio to be an executive secretary at Wright-Patterson Army Air Corps. While there she met a handsome, decorated pilot named Robert Richey, who drove a powder-blue convertible . They were married September 28, 1947 in Centerville and began a 58 year marriage, moving from place to place in the Air Force. When Robert retired at George AFB in 1968 they decided to stay in Apple Valley. Charlotte began working for Apple Valley Ranchos Realty and then became Assistant Registrar at Victor Valley College. In the 1990's they purchased Happy Wanderer Travel which had been the first travel agency in the Victor Valley. Charlotte ran Happy Wanderer for a number of years before selling. During that time they were able to do a lot of traveling, something they both enjoyed. She was preceded in death by her parents, her husband Lt. Col. Robert H. Richey, her brother James DePuy, her brother-in-law Dr. Daniel Coughlan, son-in-law Chet Forte, and nephews Chuck DePuy and Dr. James Coughlan. She is survived by her sister Jeanne Coughlan of Santa Rosa, CA, sister-in-law Sharon DePuy of Missouri and her four children, Barbara Richey-Romero (Louis) of Victorville, Robert H. Richey Jr. (Joanne), Apple Valley, Patricia Forte of Apple Valley and Randall Richey (Marianne), Victorville, 6 grandchildren, 8 great-grandchildren (with another due in September) and several nieces and nephews. Viewing will be held Tuesday, July 2 from 6:00 p.m. until 8:00 p.m. at the Sunset Hills Chapel. Funeral ceremony will be held Wednesday July 3 at 10:00 a.m. at Sunset Hills Chapel. Interment will be private at Sunset Hills Memorial Park. Mother, we will love and miss you forever.

The family of Charlotte Elaine Richey created this Life Tributes page to make it easy to share your memories.

Send flowers to the Richey family.