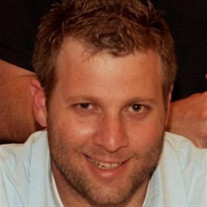 David Lee “Dave” Byrne passed away on Wednesday, June 28th, 2017 in Apple Valley, CA at the age of 37. Dave is survived by his loving wife Amy Byrne and two beautiful sons, Ryan (3) and Nathan (1); parents Kevin and Debbie Byrne; brother Joseph Byrne; and grandparents James and Sheila Byrne, and Joe and Margaret Minneci. He is preceded in death by grandparents Hubert and Flora Miller. Dave was born on August 7th, 1979 in Winter Garden, Florida. He graduated from Apple Valley High School in 1998. He married Amy Boyle on July 30th, 2010. Dave worked as a Communications Specialist, and spent 15 years working as a contracted employee for the United States military, with the last 13 years spent in Afghanistan managing the communications and networking systems at Bagram Airforce Base. Dave was such an integral piece of the operation there that he was often called back early from vacations (which he rarely took), and even missed the birth of his second son Nathan. Dave was a loving husband and a caring father. He was a very kind, giving person, and made an effort to take care of everyone around him. He had a wonderful sense of humor, and will be remembered for many of his iconic phrases, like “Well hell yeah”, “that’ll buff out”, as well as for calling everyone either “chief” or “boss”, or for referring to a piece of equipment as a “Binford 6000” model. Dave loved music and technology, and also had a great sense of adventure. He loved travelling, riding off-road vehicles, and boating, although he was most at home sitting around a bonfire in his backyard with a cold Corona in his hand, surrounded by friends and family. A memorial service is scheduled from noon to 2:00pm on Friday, July 21st, 2017 at Sunset Hills Memorial Park in Apple Valley, with a reception to follow at the same location. All are welcome to attend and join us in celebrating his life. As an example of the sense of humor Dave had, he has requested that all in attendance wear Hawaiian themed attire.

The family of DAVID LEE BYRNE created this Life Tributes page to make it easy to share your memories.

Send flowers to the BYRNE family.