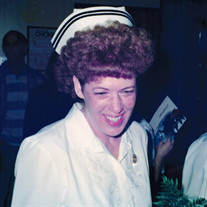 In the early morning of November 19, 2016, Dawn passed away peacefully in her home in Oak Hills, CA. She was surrounded by close family. Dawn was seventy-five years old. Dawn was born in the town of Maywood, CA on August 6, 1941. She was daughter to Marvin Francis O’Grady and Lillie Patricia Staley, and the oldest to brother Frank and sister Jill. While Dawn never would have characterized herself as adventurous, her life was filled with adventure. In her adolescence, when she wasn’t working, she would be planning ways to follow Elvis Presley around the world while he toured. She was even fortunate enough to get to know “The King” during this time when he was visiting Los Angeles for shows. At sixteen years old Dawn found and married her partner for life, Walter Joyce Greer (died August, 2011). When you know, you know. Early on she and Walt would travel back and forth from Los Angeles to Grassy Hill, Virginia, and then to Alaska and Germany, while Walt was serving in the Army. Eventually they would settle in Orange County, CA, and in just under two decades Dawn would become the mother of five children -- four sons and one lucky daughter. Dawn was destined to care for others. She was a selfless mother who truly defined the term “unconditional love”. She would take in so many without question. She had a particular fondness for babies, which led to her receiving her RN from Cypress College in Cypress, CA. She would spend over twenty years as a nurse, serving everywhere from postpartum to addiction medicine. Through all of this Dawn found time to become the center of the Greer universe, being the glue that bound every son, daughter, grandson and granddaughter. Dawn has left a hole that will never be filled. She is survived by her sons and daughter, Gordon, Jeff, Chris, Kim, and Elvis, who live throughout California and Wisconsin; her grandchildren, Taylor, Arianna, Danielle, Ariel, Aaron, Adam, Alex, Maddie and Bryson; her sister Jill.

In the early morning of November 19, 2016, Dawn passed away peacefully in her home in Oak Hills, CA. She was surrounded by close family. Dawn was seventy-five years old. Dawn was born in the town of Maywood, CA on August 6, 1941. She was daughter... View Obituary & Service Information

The family of Dawn Elaine Greer created this Life Tributes page to make it easy to share your memories.

Send flowers to the Greer family.