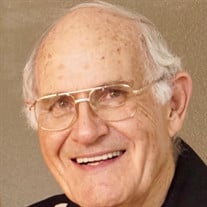 Donald Lee Allen (Don Allen), Age 82, of Apple Valley, CA passed away on April 19, 2019 after much traveling, getting old in style and failing health. Don was born October 22, 1936, and raised in El Paso, TX. He was the first son of Virgil E. and Velma P. Allen. He was preceded in death, after 50 years of marriage, (December 23, 1961) to Leota Jean (Ball) Allen. His survivors are his loving wife Vicki Godden-Allen of 8 years, Brother Steve and Beverly Allen, of Allen, TX, Son Earl Lance and Cassie Allen of Apple Valley, CA, Son Craig Lee and Tami Allen of Redmond, OR. Grandchildren: Brett Allen of Celeste, TX, Matthew Allen of Pullman, WA, Brooks Allen of Victorville, CA, Gabrielle (Allen) and Michael Bechtold of Apple Valley,CA. Survivors in Vicki's family include Glen Godden of Hesperia, Wayne and Jerry Godden of Victorville, CA, Joel and Diane Godden of Hesperia, CA, Minda and Richard Lamphier of Muskogee, OK, as well as 7 grandchildren and 10 great grandchildren. Don graduated from Ysleta High School in El Paso, TX in 1954 and attended Sul Ross State Teachers College in Alpine, TX. He then joined the US Navy. He considered his years in the navy as being the foundation of his education for life. He served in The West Coast Recruit Blue Jacket Choir as principal soloist and then was assigned to the USS LST 1110. He was honored to participate in its naming: The "USS San Bernardino County (LST 1110)." He served 3 years on board and took three major supply cruises to the Arctic Ocean to establish and supply The DEW (Distant Early Warning) Line System. He left the Navy in 1959, as a Damage Control 2nd Class Petty Officer. With this experience he was able to get an operational and management position with Southwestern Portland Cement Company, where he worked for over 30 Years. In Odessa, TX in April 1961 he was Raised to a Master Mason in Odessa Lodge #955 of the A.F. & A.M. In Amarillo, TX he joined Toastmasters International which brought about Life Changing results. Don finally learned to speak without stuttering and ended a two generation family history of stuttering. In 1989 he went to Missouri School of Auction and established the local business of Apple Valley Auction. He was very proud of the skills he had, which he used to help various groups, schools and churches in their fundraising as an emcee and auctioneer. He joined Apple Valley Chamber of Commerce where he became very involved and active for several years. In 2009 he was honored with a Lifetime Membership to Apple Valley Chamber of Commerce. He was a 30 year member of The Rotary Club of Apple Valley, Rotary International, and became a Paul Harris Fellow. He was a 32 year active member of Church of the Valley, a 16 year Ruling Elder and sang in the choir. In 2003 he joined the Community Church of Jess Ranch, sang In the Choir and was an active member. In 2003 he divested himself of all major assets, relocated to Jess Ranch and became a full time caregiver for his wife Leota Jean, who was suffering from Alzheimer's. During this time, in 2008, he moved Leota Jean to Longview, TX where her sisters and family could spend time with her before the last stages of her battle with Alzheimer's. In 2009 he returned to Apple Valley and found it necessary to put Leota Jean into the Memory Care Center at The Sterling Commons, where God took her Home in April 2011. Don became very involved in the Alzheimer's movement and ran Alzheimer's Support Group Meetings to share his past experiences, resources and advice with other people faced with Alzheimer's disease. Don was blessed with meeting and getting to know Vicki Godden, Ph.D., who became a close friend and companion. They were married on August 27, 2011. Don and Vicki were blessed by traveling the USA and visiting every state in our great union. They were also blessed in their many months of extensive European travels and long term stays. During their years together, they spent much more time traveling the world than at their home in Apple Valley. Memorial services will be held Thursday, May 2, 2019 at 10:00 a.m. at Sunset Hills Memorial Park, 24000 Waalew Road, Apple Valley, CA. Condolences can be made through the Sunset Hills Mortuary website, www.sunsethills.cc LIFE IS GOOD! LOVE IS BETTER!

Donald Lee Allen (Don Allen), Age 82, of Apple Valley, CA passed away on April 19, 2019 after much traveling, getting old in style and failing health. Don was born October 22, 1936, and raised in El Paso, TX. He was the first son of Virgil... View Obituary & Service Information

The family of Donald Lee Allen created this Life Tributes page to make it easy to share your memories.

Send flowers to the Allen family.