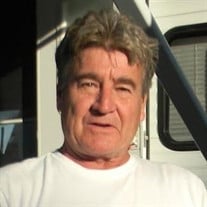 Gary Lewis McNeill Pineda Gary Lewis Pineda entered the arms of Jesus on April 5, 2018, in Apple Valley, California, passing at the age of 63 from an aggressive and extremely rare cancer. Gary was born February 19, 1955, to Monica E. Walker and Lewis C. Pineda, in Santa Ana, California, and when he was young Gary was adopted by his step father, John (Mac) McNeill. Gary graduated from Victor Valley High School in 1973. Furthering his education while attending Victor Valley College, he made the President’s list by maintaining a 4.0. Gary married the love of his life, Laura Ann Padilla, on April 28, 1979. As a young couple they enjoyed traveling and skiing, but their young lives were forever changed in 1984 when Gary had a life-changing accident at the age of 29 while working at the Riverside Cement Plant. The Lord spared his life, and with the strength of their faith, he walked again. He endured daily pain from his injuries, but his days were blessed and brightened when after 19 years of marriage, Laura and Gary had 4 children: Gabriel, Arianna, Gianna, and Katelyn. Gary enjoyed many activities during his 55 years in the high desert, taking frequent trips to the mountains and beaches. He was a huge Star Trek fan, and enjoyed reading, astronomy, and the get-togethers with Laura’s large family was an adventure all its own. In his younger years he enjoyed boating trips to Lake Mead with his brothers as part of ‘the three Musketeers’, and trips throughout the years to Paradise Valley, NV with his sisters family, but they couldn't compare to time spent with his family which was most important. Gary did a lot with his family, traveling to air shows to watch the Thunderbirds and Blue Angels, watching his children in their many sporting activities, supporting them, guiding them and sometimes assisting in coaching them. Gary was a great cook so the family was treated to a wide variety of cuisines. Gary touched many lives in different ways, and we are all blessed by this. Gary is survived by his wife, Laura Ann Pineda, their children: Gabriel Anthony Pineda, Arianna Michelle Pineda, Gianna Rose Pineda and Katelyn Elizabeth Pineda, all of Apple Valley; uncle Henry Pineda of Orange, CA; sister Sandra Phillips of Winnemucca, NV and her children: Tonya (Loren) Hunewill, Hal Phillips and Cody Phillips; his brother Lloyd's children of Shelbyville, TN: Jessica, Baron, Brandon and Sarah Clabaugh; in-laws Dennis and Anita Padilla of Victorville; brother-in-law Mark Padilla of Ione, CA and his children: Issac (Melissa) Padilla and Ashlee Padilla; sister-in-law Susan (Joe) Conway of Apple Valley and their children: Rachel (DJ) Scorza and Joseph (Rashida) Conway; brother-in-law Christopher (Marcela) Padilla of Apple Valley and their children: Christopher (Ashleigh) Padilla, Amanda (Stephen) Rabon, Sofi Sanchez Velasquez and Daniel Sanchez Velasquez; sister-in-law Victoria (Gary) Velarde of Victorville and their children: Tori (Angel) Flores, and Gary Velarde; sister-in-law Tina Padilla of Vacaville,CA . Also numerous cousins, grandnieces and grandnephews. Gary is preceded in death by their Baby in Heaven, his parents; his uncles Lloyd Walker, John Hosking and Graeme Hosking; his brothers, Baron and Lloyd Clabaugh; brother-in-law Jim Phillips; niece Amanda Clabaugh, and grand-nephew Logan Hunewill. Condolences may be sent to 16280 Del Norte Dr., Victorville, CA 92395. In lieu of flowers, please make a donation to your favorite charity. A celebration of life will be held Saturday, April 21, 2018 from 2-5pm at the Family Life Church 14411 La Paz Dr. Victorville, CA.

The family of Gary Lewis McNeill Pineda created this Life Tributes page to make it easy to share your memories.

Send flowers to the Pineda family.