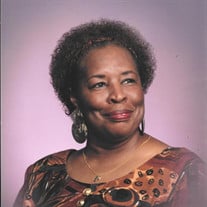 Geneva L. Gray Williams was born on August 8, 1939 in Pine Bluff, Arkansas to the late. Mr. Julius C. Gray & Mrs. Margaret Cravens Gray. Geneva was the oldest of eight children. She departed this life on April 11, 2020. Geneva was educated in the Pine Bluff Public School System, where she attended Merrill High School was a member of various clubs, and played the saxophone in the Concert and Marching Bands. She graduated in 1957. After graduating from high school, Geneva married her high school sweetheart, Leo Williams on August 2, 1957 in Detroit, Michigan. To their union four children were born. Geneva worked at various jobs throughout her life, but her real passion was teaching infants and toddler age children. She retired as a teacher from the Bible Baptist Church Preschool in Victorville, California. During her career as a preschool teacher she pursued her degree in Early Childhood Development, receiving an Associate of Science from Victor Valley College. She also attended Azusa Pacific University. Geneva became a member of Celia E. McLeod, Chapter #79, Order of the Eastern Stars P.H.R.A., Upper Heyford England, where she was initiated into the Chapter February 1974 and received her Queen of South Degree in March 1974. She later transferred her membership to High Desert Flower, Chapter #93, Order of the Eastern Stars P.H.R.A., Victorville California, where she was initiated into the Chapter November 1978. She served as Chapter Secretary in 1980 and 1981. Geneva was elected to serve as the highest-ranking officer in the chapter, Worthy Matron, in 1987. She was later appointed Grand Deputy from 1989 to 1992 and then again 1995 was a member of the Daughters of the Imperial Court, Mohammed Court #39, Little Rock Arkansas, Stella Rebekah Court #47. Geneva received the Administrative Degree of the Heroines of Jericho to serve as the Most Ancient Matron of Gertrude Edwards Court # 26, in 2002. She was also a faithful member of Emmanuel Temple CME Church, Victorville, CA. Geneva loved doing crafts, sewing, gardening, reading mystery books and solving puzzles. She was a loving caring daughter, sister, aunt, mother, grandmother (Grandma), great-grandmother (G.G.) and friend. Geneva will be remembered as a strong clear spoken woman with a heart of gold. She will be greatly missed by family and friends alike. Her husband, MSgt Leo Williams, U.S.A.F. (Retired); her brother Julius “Sonny” Gray, Jr. and sister Betty Guillory preceded her in death. She leaves to cherish her memory and carry on her family legacy; her children: Daniel (Rita), Sharon Ransby (Thomas), Theresa Haller (Eric) and Brian; five grandchildren, Michele, Issac (Ashley), Leah, Nicole and Sean; two great-granddaughters: Summer Mae and Monroe Louise; three sisters: Margaret Ann, Marian, Judith; two brothers: Anthony and Michael and a host of cousins, nieces, nephews and friends. Geneva will be interred at Arlington National Cemetery in Arlington, VA at a later date. In lieu of flowers, please donate to the American Heart Association.

The family of Mrs. Geneva Louise Williams created this Life Tributes page to make it easy to share your memories.

Send flowers to the Williams family.