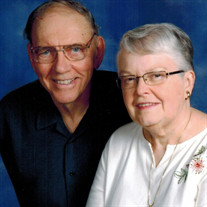 GEORGE DAVID SPENCER SEPT. 02,1933 - FEB.4,2017 George was born in Rahway, NJ and spent his early years in Bradford, Vermont with various relatives after his mother Annabelle died when he was 4 years old. Later on he moved to his father's farm in Vergennes, VT and helped his father on the farm. His Aunt Marion became an influence in his life at that time. When he was 21, he moved to CA and went to school studying Avionics and received a 2 year degree from Northrop Technical School. Afterwards, he joined the air force and when he was discharged in 1958 he moved to Sacramento, CA when he went to work at Aerojet. George met his devoted wife, Joanna, at the First Methodist Church and they were married in Sacramento, CA on May 20,1962. They celebrated there 54th anniversary this past year. They lived there until 1964 then moved to Germany for new employment with Bendix Engineering Co. After returning to the USA, their family lived in Fort Myers, Florida until 1972 and then were stationed in Quito, Ecuador SA. They returned to USA in 1975 and lived in Barstow, CA where George worked for the Goldstone Tracking Station as Chief Tech working on the large satellite dishes. George retired in 1999 and in 2003 George and Joanna moved to Apple Valley, CA. During his time in Apple Valley, George kept busy with gardening, attending church, and volunteering for the rummage sale at Church of the Valley until his health prevented him from doing so. He also was an avid photographer, genealogist and liked to search for old books. George was a hard worker and spent many days working around the house and tinkering in the garage working with his tools. He always had some type of project going. He kept a joyful spirit and would often have something funny to share. He loved airplanes and spent a lot of time reading about the space projects he was involved with at work. George was strong, had a good heart, and never spoke badly about others. He will be deeply missed by his family and friends. George was diagnosed with Parkinson's in 2005. His long journey is now over. He was predeceased by his father Elmer G. Spencer, mother Annabelle Spencer, and half brother Robert Spencer. He is survived by his wife Joanna, son David, daughter Margaret, grandchildren Elijah, Alexandria, and Daniel Bremmer, brother Herrick, half sister Joyce Davis, half brother Frank, half brother Bill, and many nieces and nephews.

GEORGE DAVID SPENCER SEPT. 02,1933 - FEB.4,2017 George was born in Rahway, NJ and spent his early years in Bradford, Vermont with various relatives after his mother Annabelle died when he was 4 years old. Later on he moved to his father's... View Obituary & Service Information

The family of George David Spencer created this Life Tributes page to make it easy to share your memories.

Send flowers to the Spencer family.