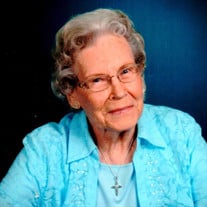 Gladys Lillian (Garton) Moore November 30, 1923 – July 25, 2019 July 25th was Gladys’ last day on earth and her first day in Heaven. She was born on a farm 2 ½ miles southeast of Diller, Nebraska and was the youngest of ten children born to Frank and Louise Garton. She started kindergarten at age four, skipped the seventh grade and attended a rural one room school through the eighth grade. Gladys graduated from Diller High School in 1939 at the age of 15. After she graduated, she moved to town and lived with a family taking care of the children and doing housework for $3.00 a week. After three of her brothers moved to California to work in the defense industry, Gladys wanted to visit, so her brother John sent her the money for a ticket. Her visit became permanent and she lived in Ocean Park. When her sister Clara and brother-in-law also moved to California, Gladys moved in with them in a house they purchased in Burbank. She and her sister caught the bus at the end of their street and rode to Lockheed where they worked on P-38’s in a role similar to Rosie the Riveter. In 1942 she met Norman who was in the Navy at the time. Soon after they met, he was deployed overseas and didn’t return until 1945. Gladys had moved to Burbank by then but Norman was able to track her down with the help of her best friend and future sister-in-law, Monica. They dated and were married in Las Vegas in 1946. They started their family in Bell Gardens, California and had three children, James, Susan and David. Norman was a carpenter and Gladys was a home-maker and stay-at-home mom. Norman passed away in 1976 and a few years later, Gladys moved to Apple Valley. Her family grew to include 6 grandchildren and 8 great-grandchildren. She loved spending time with them and they with her-each claiming they were her favorite. Gladys kept busy gardening, doing yard work and watching the quail, roadrunners and bunnies. She didn’t often miss Church, Sunday School or Bible Study. She was confirmed at St. Paul’s Lutheran Church in 1940 and has attended Ascension Lutheran Church for nearly 40 years. Her favorite season was Lent and Easter when she loved to hear the message that her Redeemer Lived! Gladys never lost her sense of humor. She often had her nurses laughing with her. But she could also let you know she might be upset by that certain look on her face. Gladys is survived by her son, James Moore (Kelli), Apple Valley, daughter, Susan Brooks, Apple Valley and son, David Moore (Renee), Diamond Bar. She will also be missed by her grandchildren-Lisa, Janet, Joseph, Crystal, Mandy and Melanie, 8 great-grandchildren, numerous nieces and nephews, and her church family and friends. Funeral Services will be held at Ascension Lutheran Church, 22130 Ottawa in Apple Valley on Monday August 5th at 11:00 with reception to follow in the social hall. A graveside service will be at Rose Hills in Whittier on Tuesday morning at 11:00.

The family of Gladys Lillian Moore created this Life Tributes page to make it easy to share your memories.

Send flowers to the Moore family.