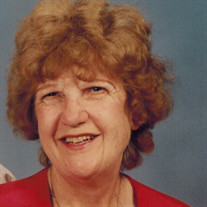 Gloria Jean Reusch 05/19/1928 -12/22/16 Gloria was born in Nebraska City, Nebraska and spent the first few years of her life in near-by Talmadge. She had fond memories of growing up as an only child on a farm, with her mom, dad and many farm animals to keep her company. She attended a one room school house and had good memories of that as well. Her father had wanderlust which Gloria inherited, and the family moved to California when she was still young. Gloria worked in her parents’ grocery store until she went to work in the offices of Sears Roebuck. She met and married Herbert Reusch, with whom she had 5 children, and they settled in Lynwood California. Gloria went to work for Home Savings and Loan, where she worked for many years as a loan consultant. After retirement, she was able to fulfill her love for travel. She made several trips to Europe and explored our own east coast. She particularly loved anything historical and especially Williamsburg, VA where she had roots. After Herbert passed in 2002, Gloria moved to New Jersey near her eldest daughter Candy. She settled in Plainsboro, where she continued to take trips with the local senior center. Gloria loved going into New York City to see plays and simply soak up the excitement. Another highlight was the trip she took to Ireland with her second daughter Darlene and her grandson Joe. Gloria continued to love the Irish traditions and food. When she decided that she’d had enough snow, Gloria moved back to California and moved in with her third daughter Barbara, where she continued to have adventures. She was very active until her illness progressed, starting each morning with pushups and jumping jacks followed by her daily two mile walk! In the evening, her joy was watching Who Wants to Be a Millionaire, Jeopardy, and Wheel of Fortune. Gloria, daughter Barbara and Son-in-law Allan would compete to guess all the answers…usually she won! While Gloria had a sweet tooth and loved desserts, she also had an admirable ability to monitor her intake and practice discipline in all things! Gloria was a devout Roman Catholic and faithfully attended weekly services, most recently Holy Family Church in Hesperia, CA. Gloria also prayed the rosary nightly, praying for any and all around her. She was faithful in supporting charities and wrote monthly checks to help others less fortunate than herself. Gloria is survived by her children: Candy Castellino (Gary), Darlene Morgan (Randy), Edward Reusch (Beth), and Barbara Woloshin (Allan). She is also survived by six grandchildren: Cara Lubit (Ryan), Jeremy Reusch, Alfie Osborne, Desiree Reusch, Jonathan Osborne (Patricia), and Joseph Morgan, as well as one great grandson, Carter Lubit. Spouse Herbert passed away in 2002 and son Frank (Mary) passed in 2001. Gloria loved her family very much and that was reciprocated. She will be dearly missed.

Gloria Jean Reusch 05/19/1928 -12/22/16 Gloria was born in Nebraska City, Nebraska and spent the first few years of her life in near-by Talmadge. She had fond memories of growing up as an only child on a farm, with her mom, dad and many... View Obituary & Service Information

The family of Gloria Jean Reusch created this Life Tributes page to make it easy to share your memories.

Send flowers to the Reusch family.