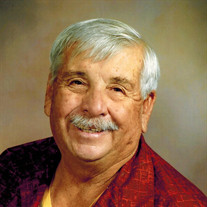 Harold Monroe Brooks was born on September 2, 1943 to Eugene and Myrtle Brooks in Los Angeles, California. He was called home July 15th with his wife and family at his side. He was preceded in death by his parents, brothers Clyde, Gene and Mike, and sister Anita. He is survived by his wife and best friend, Sue; his children Ted (Elaine) Brooks, Debbie (Todd) Lair and Dan (Katie) Brooks; first wife, Joan Hefley: and step daughters Lisa Mowery and Janet Mowery. He is also survived by 12 grandchildren and one great grandchild. Hal graduated from Downey High School in 1962. In 1967 he was hired by So. Calif. Edison as a ground man and retired in 2001 while holding the position of service crew foreman/ "trouble-man". A year after he retired from SCE, he began a second career with Par Electric and worked another 13 years. Hal was a very busy guy. He loved camping and fishing, always making it a friendly competition to catch the most or biggest fish. He enjoyed hunting with his boys and target shooting, Hal was a big fan and supporter if all his grandkids who played volleyball and baseball. Another hobby was customizing Radio Flyer Wagons which he gave to his family and many friends. His latest hobby was his 1948 F-1 truck. He really enjoyed driving it around town and getting a "thumbs-up" from many who crossed his path. Hawaii was his favorite vacation destination making trips and lots of island friends through the years. He loved his mother-in-law's meatloaf, razzleberry pie, donuts and cookies and mai-tais. He liked taking pictures, sending Christmas cards, and getting text messages from his grandkids. He also liked Earnhart Jr, the Rams and Dodgers. Hal's fun personality always it up the room and he was a self-described chick magnet and "cute". He was generous to all and touched many lives. Hal will be greatly missed by all his "best-friends" and "favorites" ...... Including his two golden retrievers, Pardner and Sailor. A memorial service will be held on August 26th at 10:00AM at Sunset Hills Memorial Park. Donations can be made to Kindred Hospice or Memorial funds given to Ascension Lutheran Church.

Harold Monroe Brooks was born on September 2, 1943 to Eugene and Myrtle Brooks in Los Angeles, California. He was called home July 15th with his wife and family at his side. He was preceded in death by his parents, brothers Clyde, Gene and Mike,... View Obituary & Service Information

The family of Hal Brooks created this Life Tributes page to make it easy to share your memories.

Send flowers to the Brooks family.