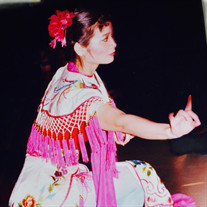 Birth: Sep. 11, 1950 Changhua Changhua County, Taiwan Death: unknown "Hueih-Hueih is the picture of grace gliding across the stage in a faded photograph." ["Lake Views" Magazine (Whatcom Co., WA), January 2017]. HH is born in the Year of the Tiger. Her father, SU YUAN JIHNG, is a Cavalry Officer who leaves the Mainland with CHIANG KAI-SHEK in 1949. Her mother, CHEN SHU-JEN, an elementary school teacher, suffers through the Japanese occupation. HH graduates from the Government Teachers' University and Chinese Cultural College. She teaches music & Chinese Classical Dance at Nei-Lei Junior High School. She organizes dance & athletic events involving hundreds of costumed students performing in stadiums. She is selected to represent her country by dancing in Hong Kong & Osaka, Japan, for Expo 1970. HH meets MAJ MAX K. HURLBUT, a U.S. Army Advisor to the ROC Special Warfare Command. They are married at the Grand Hotel, Taipei, on 13 Oct 1982. She is naturalized a U.S. citizen in Kodiak, Alaska, where her husband is Chief of Police. She cooks for a State Parks wilderness cabin-building crew on remote Shuyak Island. She assists MAX in implementing an Aleut Village Police Force on St. George, the Pribilof Islands, at the height of the Bering Sea winter storm season. HH is a Public Safety Dispatcher, Jail Guard, & EMT in Whittier, AK, among the glaciers & fjords of Prince William Sound. She is licensed by the Alaska Railroad to drive the last rail-ambulance through four miles of tunnels as (then) there is no road access. Their final adventure is as City Marshal of Tombstone, Arizona, to reform a corrupt police force. [See, HURLBUT, "Vagabond Policeman" (2013)]. HH & MAX retire to a log cabin on Lake Whatcom in Bellingham, WA, where she is a founder & teacher of Mandarin & dance at the Mei-Hua Chinese School. She occasionally dances at cultural exhibits in San Francisco & Anchorage at the request of the Consulate.

The family of Hueih-Hueih "Way-Way" Su Hurlbut created this Life Tributes page to make it easy to share your memories.