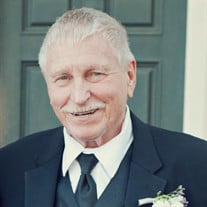 “Cadillac Jack” Jack Wayne Randolph, 91, a 42 year resident of Phelan, CA, died peacefully at home in Victorville surrounded by his loved ones on June 10, 2021. Jack was born on June 26, 1929 in Plymouth, Indiana to Franklin and Carolyn Randolph. At 15 years old, Jack gave up a formal education to work in the oil field with his father Franklin, to help make ends meet. In his early 20’s Jack found a knack for sales, in particular, vacuum cleaners. Jack sold vacuums door to door for many years, until opening up a distributorship in Northern Ohio. Between 1951 & 1961 Jack had five children, and adopted two. Randy Randolph (deceased), Debra Randolph (68), William Randolph (68), Robert Randolph (66), Steven Randolph (64), Laura Radebaugh (62), Jack Wayne Randolph Jr. (60). In 1961, Jack moved to California and he became a Kirby distributor in Pomona, CA. Later on, in 1974, he met his current wife, Amalia (Molly) A’Hearn Randolph and married her in 1975. Together they opened numerous vacuum stores throughout the 70’s. The businesses were located in Montclair, Alta Loma, Upland, Glendora, Diamond Bar, Rancho Cucamonga, Pomona, & Corona. It was in 1979 that Jack & Molly moved and became residents of Phelan, California with a goal of building their own house. That same year, Jack and his son Steven, opened the Pinon Hills Trading Post. With a desire to return to the vacuum business, he relocated to Phelan and renamed the business, Country Variety Store. In 1986, Jack finished building what most high desert residents know as “the rope house” at the intersection of Phelan and Randolph Rd. In the 1980’s they had three children of their own, Holly Lyons (38), Victor Randolph (35), Heidi Van Patten (34). Jack and Molly were members of High Desert Baptist Church in Phelan for many years until he followed his children over to High Desert Church. Jack retired from selling vacuums at age 85. In 2017, he sold the commercial property to Race Communications. Jack & Molly eventually downsized & moved to Spring Valley Lake in August of 2020. Jack made a lasting impression on the lives of his family, friends, customers, and mere strangers too. He was always willing to help someone in need. He will be remembered for his love of Christ and desire to spread the word. He was a family man first, but he also loved automobiles in particular, Cadillacs. Also, he was known for swing dancing, quick wit, wisdom, sense of humor, and his loyalty to his family was undeniable. He was a man of integrity and was fully transparent, whether it was asked for or not. His life, legacy, and the wild family tree he created, will forever be engraved in our minds and on his loved one’s hearts forever. Jack is survived by his loving wife, his children, his 21 grandchildren and 16 great grand children. Jack’s celebration of life service will be held at Sunset Hills Memorial Park and Mortuary in Apple Valley, CA on Tuesday June 22nd at 11am. Romans 8:28 And we know that in all things God works for the good of those who love him, who have been called according to his purpose.

Send flowers to the Randolph family.