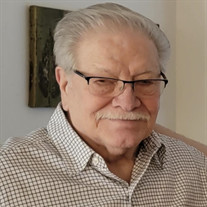 James Joseph Vetack, 85, beloved Husband, Dad and better known as Pop, went to be with his Lord, while surrounded by his family, on Sunday October 10th, 2021. He was born on February 16th 1936 to Margaret and Joseph Vetack in Pittston PA. He was proceeded in death by his parents and 2 brothers, Joseph and Gerald Vetack. In his younger days, James enjoyed summers water skiing and spending time with friends and family at Lake Wallenpaupack in PA. He graduated in 1954 from Jenkins Township High school in Sebastopol PA. After graduation he entered the Air Force in Colorado Springs, CO. He met his wife Barbara at Lake Wallenpaupack and they married on October 7th 1961. Together they had 2 children. They recently celebrated their 60th wedding anniversary. He and Barbara along with their children, lived a military life, moving from Benton A.F.B. Wilkes-Barre, PA to Houma Air Force Station in Louisiana, Kincheloe A.F.B. in Michigan, Clark A.F.B. in the Philippines, and then back to the United States where he spent his final military years at George A.F.B. in Victorville CA. where he retired as a Msgt. in 1978. He then worked for Civil Services until the closing of George A.F.B. and Fort Irwin until his retirement in 1998. James was a master craftsman and did it for a living as well as a hobby. He remodeled the homes of many including his own. He enjoyed life with his family and was deeply devoted to each and every one of them. He was always there, always involved, every birthday party and event. He was a kind hearted and selfless man. He was a friend to all and foe to none. He and his wife Barbara had many friends and enjoyed socializing and camping at Oak Glen Retreat in Yucaipa & Mountain Lakes Resort in Lytle Creek. He had the best sense of humor and never met a Klondike bar he didn’t like. He was adored and loved by all. He will be deeply missed by his family and friends. He was a great Christian, he and Barbara attended St. Joan of Arc Catholic Church. In addition to his sweetheart Barbara, he is survived by daughter Rochelle “Shellie” (Reid) Martinson of Hesperia and son James “Jim” (Debbie) Vetack of Helendale. 2 sisters, Margie Vetack and Jeanne Talipan, of Pittston PA. Eight grandchildren, Joshua (Jill), Jordan (Tabitha), Jonah (Zach), Ryan (Laurette), Rory (Jazmine), Reianna (Scotty), Matthew and Hannah. Nine greatgrandchildren, Ellie, Emily, Jayden, Easton, Marley, Jaycee, Jacob, Daxton and Teagan. Services will be on November 11th, 2021 @ 11:00AM at Victor Valley Cemetery. In lieu of flowers, the family ask that you make donations to the Wounded Worrier Project. Jeremiah 17:7-8

James Joseph Vetack, 85, beloved Husband, Dad and better known as Pop, went to be with his Lord, while surrounded by his family, on Sunday October 10th, 2021. He was born on February 16th 1936 to Margaret and Joseph Vetack in Pittston PA. He... View Obituary & Service Information

The family of James Joseph Vetack created this Life Tributes page to make it easy to share your memories.

Send flowers to the Vetack family.