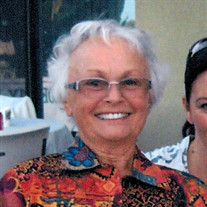 Joan Dean Bolinger, better known to her friends and relatives as Joani, went to meet her Lord and Savior Jesus Christ on Monday, April 25th. She was at peace with her family around her just as she wanted. She had been diagnosed with a brain tumor in early December and endured surgery, radiation treatment and chemotherapy but could not overcome the cancer. She fought it bravely to the last. She was born in Sleepy Eye, Minnesota on February 3rd 1941. She moved with her Family to Southern California during World War II where her parents, Irlin and Ada Messerschmidt, worked in the aircraft industry for Douglas Aircraft. They retired and moved to the High Desert in the late 1970’s. Joani married and moved to the High Desert in 1958. She worked at the Roy Rogers and Dale Evans Museum in Apple Valley, Reserve Oil and Gas and also managed two businesses. She married Roy Bolinger in 1974 and lived with him in Apple Valley for her remaining years. A petite lady with a fiery personality, she had a love of honest, hardworking people. When you met her, you soon learned that short jokes were not appropriate. As her husband has often said, Dynamite and Diamonds come in small packages, she was definitely both. An immaculate housekeeper and superb parent, she did not suffer fools gladly. She was an active Deacon at Church of the Valley, participated in the choir for many years and was also a member of the Worship Committee. In later years, she attended Sonlife Community Church and Jess Ranch Community Church. She was an avid horsewoman all her life and had many friends from Big Bear, Lucerne Valley, and throughout the Victor Valley. She was a craft person who participated in a sewing club, quilting, knitting, needle point, and ceramics. In every craft she was a true perfectionist and excelled in every project she tried. She was loved by all who befriended her and will be sorely missed by relatives and friends alike. She is survived by her husband of 41 years, Roy Bolinger, her son, Charles Wayne Bowling who preceded her in death, her daughter Kelley Beach, son-in-law Steven Beach, grandson, Tyler Beach, brother, Jim Messerschmidt who preceded her in death and family, brother Bud Messerschmidt and family, sister Charlotte Melton and family and other cousins and their families. There will be a Memorial Service at Sunset Hills Memorial Park on May 5th, 2016 at 2pm.

Joan Dean Bolinger, better known to her friends and relatives as Joani, went to meet her Lord and Savior Jesus Christ on Monday, April 25th. She was at peace with her family around her just as she wanted. She had been diagnosed with a brain... View Obituary & Service Information

The family of Joan Dean Bolinger created this Life Tributes page to make it easy to share your memories.

Joan Dean Bolinger, better known to her friends and relatives...

Send flowers to the Bolinger family.