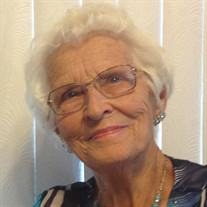 Johanna (Jo) Arida Van Hulzen Tinklenberg was born on October 1, 1931, in Leota, Minnesota, the youngest of seven children. At age 18 she left the cold and snow of Minnesota for sunny California, to work for a family in Long Beach. The following year she married Gordon Tinklenberg in Minnesota, and they returned to settle in southern California, where they lived until 1986 when they moved to the high desert- Apple Valley, CA. Over the first few years she had 3 children, Gloria, Glen, and Joy. 5 years later, the twins, Pamela and Tamara, were born. The early years were hard. Within a few weeks of Joy’s birth, Glen and Joy contracted polio, and Jo had to be more than a new mom- she became the lifeline for care for her two babies, finding doctors and hospitals, rides to be present and near, funding for hospital stays, special braces and shoes-- a trait that became a driving force in her. Throughout her whole life she worked to find ways to improve life circumstances for people, doing what she could to help or finding someone else who could. It set up her passion for lost kids as she opened her heart and her home to more than three dozen foster kids. She fought for them as well as her own kids to be fully accepted and vested at the church or in the school system. Years before the ADA (Americans with Disabilities Act) she fought for bussing for her kids who couldn’t walk all the way to school because of the effects of polio, and tutors and special help for foster kids who had endured family trauma. Jo remained connected to her family- to her parents and siblings, and the extended cousins and friends. Her home became the place where members of her family could find blessing and laughter or respite during tough times. When her parents could no longer care for themselves, they came and lived with her family for several years. Jo loved to play games that invited people to the table, so playing cards and puzzles were always evident. Whether it was the howling and laughter of a weekend pinochle game or Rook tournament, or the invitation to a scared new foster placement, the table provided a space for getting and staying connected. Jo and Gordon cherished and believed in the way the Spirit of God comes alive through the ministry of the local church. Their years were filled with giving of themselves to the mission of loving God, and loving your neighbor, as experienced through God’s people together. But more than anything, Jo believed and experienced the power of prayer. She daily prayed for her kids by name, and then added the names new boyfriends and spouses, and grandchildren. She prayed as people looked for work, or had life decisions to make, or went to war- she always had a long list of names she was praying for- regularly, daily. And she trusted that God was trustworthy and loving, and she knew she and all those she loved lived in God’s hands. She went to be in God’s presence on Sunday, February 18, 2018. She will be greatly missed by her loving husband of 65+ years, Gordon; her 5 children: Gloria (Rick) Tunis, Glen (Janie) Tinklenberg, Joy (Dave) Lewis, Pamela (Roger) Swaving, and Tamara (Scott) Brandts; her 15 grandchildren; 19 great-grandchildren; and many friends. Memorials can be sent to…..March of Dimes-who were life-saving rescuers in the fight against polio or Bethany Christian Foster Services.

Johanna (Jo) Arida Van Hulzen Tinklenberg was born on October 1, 1931, in Leota, Minnesota, the youngest of seven children. At age 18 she left the cold and snow of Minnesota for sunny California, to work for a family in Long Beach. The following... View Obituary & Service Information

The family of Johanna (Jo) Arida Van Hulzen Tinklenberg created this Life Tributes page to make it easy to share your memories.

Send flowers to the Tinklenberg family.