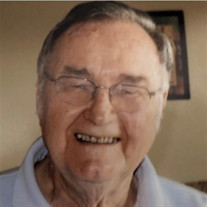 Remembering John John Theodore Wheeler was born in Los Angeles, California, on July 17, 1930. His father, Samuel Morse Wheeler, was a painter and photographer. His mother, Nahda Frazee, was a writer of poetry and a homemaker. John had three older sisters, Margaret, Virginia, and Allison, and two younger brothers, David and Joe. John was drafted into the Army in 1951 at the age of 21. He served for two years as a battalion photographer during the Korean War. He received several service medals with bronze stars. In 1954, John married Marcelene Faith Palmer. They had two children: Brenda and Jeffrey. John worked for 38 years at GTE in various departments including the switchroom and engineering. He retired in 1992. John accepted the Lord into his life at the age of seven. He was a devoted Christ-follower and served in many different churches over the years. He spent many hours working on the electrical equipment here at the Apple Valley Church of the Nazarene during its expansion. In his later years, his role became that of a prayer warrior, and he would pray and minister to those around him in need. John went to be with his life-long Savior on January 10, 2019. He is survived by his wife, Marcy, their two children: Brenda and Jeff; their four grandchildren; Shannon Durio, Heather DeCook, Matthew Caproni, and J.T. Wheeler, and their four great grand¬children; Tyler DeCook, Faith Sims, Lexi DeCook, and Russell Durio. Services: Friday, January 18, 2019 at the Apple Valley Church of the Nazarene— 12935 Central Road, Apple Valley, CA 92308. Viewing: 10:00 a.m. Service: 11:00 a.m. Graveside Service to follow at Sunset Hills Memorial Park 24000 Waalew Road, Apple Valley Reception to follow—back at the church

The family of John Theodore Wheeler created this Life Tributes page to make it easy to share your memories.

Send flowers to the Wheeler family.