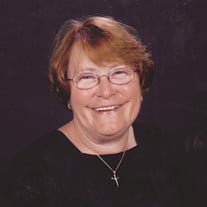 Beloved wife, mother, grandmother, and friend, Kathleen Kelley Cunningham, was called to her Heavenly Father on July 6, 2016. Kathie was born October 22, 1943 in Columbus, Ohio to E.F. Kelley and Eva Hackney Kelley. Kathie lost her beloved mother at the age of 16. After high school graduation, she moved to California in order to be closer to extended family. She worked various jobs until she started working at the Phone Company, where she met her future in-laws. Nine months after meeting him on a blind date, Kathie married the love of her life, Steve Cunningham. They made their home in North Hollywood, where they would live for over 30 years. Kathie was extremely devoted and involved in the lives of her two children, David and Kelley. She served as a den mother for Boy Scouts, PTA, and a Teachers Aide, among other things. She was very creative and mastered many arts and crafts mediums. Kathie was very spirited and could not help but made every holiday extremely special. In the 1990’s, she returned to the work force as a residual payroll accountant at NBC studios. After Steve retired from CBS in 2004, they moved to Apple Valley and Sun City. They attended and became very active in the Community Church at Jess Ranch. Kathie sang in the church choir as well as being a member of the singing groups Melodix and Reflective Sounds. Cruising the world and following NASCAR were big loves of both Kathie and Steve. After Steve's passing in 2014, Kathie focused on passionately serving Samaritan's Purse Operation Christmas Child and spending as much time as she could with her children and grandchildren, all the while bravely fighting cancer. Kathie is survived by her son David (daughter in-law Shannon), daughter Kelley Wilde (son in-law Edward), grandchildren Cassandra, Phillip, Aubrey & Justin Wilde and Wesley & Julia Cunningham. She was preceded in death by her husband, Steve Cunningham, and her grandson Edward C. Wilde, Jr. Her "Celebration of Life" service will be held July 30th at 11am at the Community Church at Jess Ranch, Apple Valley. A reception will follow. Private internment at Sunset Hills Mortuary. In lieu of flowers, please consider a donation to one of the following: Operation Christmas Child - Samaritan's Purse (828) 262-1980 City of Hope - "Dr. Pal's cancer research" (866) 683-HOPE

The family of Kathleen Kelley Cunningham created this Life Tributes page to make it easy to share your memories.

Send flowers to the Cunningham family.