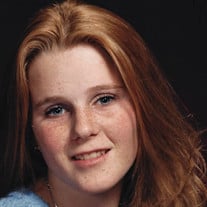 Kathleen Joan (Davis) Thomas was born October 31, 1980 in Upland, California to father Jack Charles Davis and mother Suzette Marie (Pinaire) Davis. She was the youngest child with three older brothers Jack Alfred Charles Davis, Adam Jeremy Davis and Jason Matthew Davis. She also had two older sisters from her father’s previous marriage, Ruth Ann Arrellano and Sherry Marlene Totaro. Before her family moved to the High Desert, she lived in Ontario, California and for a very brief time in Vancouver, Washington. But for over 30 years she has lived in the High Desert of Southern California. Kathleen went to school in the Victor Elementary School District and Victor Union High School District. She was proud to graduate a Victor Valley High School “jackrabbit” in 1998. Throughout high school, she was very active in the ROTC program, proudly keeping her letterman’s jacket throughout the years. She also loved and performed in choir throughout school. It was during her high school years that she picked up her nickname “Kat” which most people outside of the family know her by. To her family and especially her mom, she will always be Katie or Kathleen. On her Facebook page, she became “Cadie Jo”, which somewhat merged the two. Kathleen attended Victor Valley Community College where one quarter she and all 3 of her brothers took a drama class together…[note: an amusement to their mother who notes they didn’t need any additional training in this area, especially together]. She worked in telecommunications, including time with both Nextel and several years with Verizon Wireless. Kathleen married Thomas Strona in 1999, the same year as giving birth to the first of her two daughters, Ciara Suzette Strona. In 2006, the second of her two children, daughter Mia Jaelyn Thomas was born to her and her second husband Jerrone Thomas. Ciara and Mia were the core of Kathleen’s life. She loved all of her family and friends, but the keys to her heart were her girls. She always knew what it was to love and be loved by her parents. She always called her mom her BEST FRIEND and knew she was and always would be her Daddy’s little girl. When her Daddy died in 2009, a part of her did, too. She never got over losing him. In the last several years of her life, Kathleen endured many debilitating health issues involving her heart and stroke that left her needing to relearn to read, write and speak clearly. Ironically, as amazing as the brain can be, the speech difficulties were not as significant when she sang. She loved music and Karaoke. It was freeing to her and one of the paths that helped her to recover a huge percentage of normal speech patterns. Though, when she was tired or frustrated, the effects of her stroke always were again quite evident. In 2013, Kathleen was diagnosed with adult onset Myotonic Dystrophy type 1, an incurable genetic disorder that prevents the regeneration of muscles. It explained many things, including her hands and tongue randomly “locking” and why walking was becoming more laborious and painful. One the effects of the disease included diurnal hypersomnia, excessive daytime sleeping which kept her awake at night. She in the last few weeks of her life had begun communication with different research/clinical studies that may not have helped her, but may have helped others somewhere down the line. Kathleen died suddenly the morning of Monday October 19, 2015. Her body which had been through so much, finally gave in. She had fought hard through it all. She had tried hard to overcome both personal and physical adversities in her life…both of which most people were never aware of because she was always there to smile and laugh and love…and those who knew her loved her right back. Her favorite movie EVER was the “The WIZARD of OZ”…There is a line in it when the Wizard addresses the request from the Tin Man for a heart… “A Heart is not judged by how much you love, BUT by how much you are loved by others.” Hundreds and hundreds of messages and pictures have come across social media. Donations have come from everywhere wanting to help somehow and develop trusts for her daughters…the family is humbled…there is no measure of how much she is loved by others…it is infinite. Kathleen is now pain-free and back with her Daddy, and although our hearts are broken to lose her, they are filled with the love of having had her in all the lives she has touched and will forever touch. She is survived by her husband Jerrone Thomas and daughters Ciara Suzette Strona and Mia Jaelynn Thomas all of Hesperia, CA; her mother, Suzette Davis of Apple Valley, CA; her brothers Jack A.C. Davis of Ontario, CA, Adam J Davis of Mandan, N.D. and Jason M Davis of Columbia, MO.; Grandmother Joan A. Reece of Las Vegas, NV; Josh Kindall of Hesperia, CA who loved her deeply and aunts, uncles, cousins, nieces and nephews and an infinite amount of people who whose lives were touched by simply by having known her. Funeral Services are set for Tuesday, October 27th, 2015 Sunset Hills Memorial Park 24000 Waalew Rd Apple Valley, CA Public viewing at 12 pm and services beginning at 1pm and graveside services to follow.

The family of Kathleen Joan Thomas created this Life Tributes page to make it easy to share your memories.

Send flowers to the Thomas family.