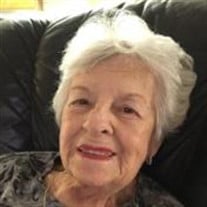 Marllyn Ann Sindrey April 1, 1934 – January 27, 2020 Age 85 Marllyn passed away peacefully in her Daughter Laura’s home with Laura by her side in the early morning of Monday January 27, 2020. Marllyn was born in Toronto, Ontario, Canada to Frederick (Fred) and Marion Naylor (Minnie). Marllyn is survived by her 3 daughters Donna (Gene), Linda (Mike) and Laura (Sandy). 4 Grandchildren: Kari (Rob), Ryan (Laura), Kristina and Todd. 6 Great Grandchildren: Amanda, Jake, Madison, Trevor, Andrew and Hunter. Marllyn was preceded in death by her Husband Doug, Her Parents and Sister Joyce. At the end of 1954 Marllyn moved with her Parents Fred and Minnie to California. Her future Husband Doug came from Canada to visit her in Whittier, California. Shortly after that they were married, January 29, 1955. They were married for 61 years until Doug’s passing in 2016. Marllyn worked for Bell Canada prior to moving to California. She worked for GTE for 28 years retiring in 1993 as a Business Representative. After retiring they moved to San Jacinto, California and enjoyed this location during their retirement. Marllyn and Doug loved to travel to Canada, they loved to go camping at Bass Lake, Pismo Beach, spend time in their cabin in Crestline CA. They visited Carmel, Monterey and San Francisco often. They Loved hosting pool parties and BBQ’s and spending time with All of the family. She had a huge love for animals, especially her Precious Cat Mary. She has various Grand dogs, cats, fish, birds, turtles, rabbits and 1 pig. Marllyn loved to swim, read and write poetry. She Loved to sing and sang with the Sweet Adeline’s group traveling out of state for many performances. She loved to watch Angels Baseball with her husband Doug. She loved the color Pink! Marllyn’s memorial will be at a later time. We All Love her very much and she will be truly Missed by All. RIP Marllyn ( Mom) you are now soaring with the Angels and back together again with Dad!

The family of Marllyn Ann Sindrey created this Life Tributes page to make it easy to share your memories.

Send flowers to the Sindrey family.