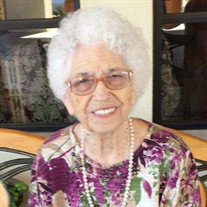 Delia Maria Salcido, always known by "Mary", was born to Carlos and Victoria on October 7, 1922 in Laveen, Arizona. Mary, being one of ten children raised by a cotton farmer and a homemaker, had special memories of her parents and siblings: Victor, Samuel, Carolina, Jaime, Emelia, Jose, Victora and Ralph, Jesus (Chuey), Noni Flores. Mary was preceded in death by her husband, son, parents and eight of her siblings. Her brother Chuey currently resides in Arizona. Mary was 19, when she met Manuel Sanchez Carranza. In 1941, on December 17th, they married in Phoenix, Arizona and spent nearly 67 years together. They moved around to several cities while raising seven children: Arturo, Martha, Nancy, Danny, Anna (Enga), Bernie and Sandy and their grandson, Jaime. Mary and Manuel were proceeded in death by their son, Arturo. Spending her golden years in Hesperia, California, Mary enjoyed her large yard, and working hard in it. Almost daily, she gardened and took care of their fruit trees and flowers. She baked and canned, literally from the fruits of her labor. She volunteered at Salvation Army and enjoyed making ceramics, crafts, and crocheting. She was an enthusiastic shopper, which she has passed this love to her four daughters. Many of whom continued to go to "town" with their "Mommy" when together. Mary loved to be catered to by her three sons and being treated special by them. She enjoyed beautiful things such as clothes, shoes, purses, jewelry, tea cups and flowers. She was known to "skip town" visiting casinos at State Line, often times with one of her grandson's behind the wheel! Shortly after losing Manuel in 2008, Mary moved to Palm Desert, California. Mary's entire life was filled with being a loving, mother and grandmother. Mary's life was long and happy. Many of the values she had, such as hard working and clean, has been passed on to her family. Mary will be missed dearly by everyone who knew her and the various ways she touched their lives will not be forgotten.

Delia Maria Salcido, always known by "Mary", was born to Carlos and Victoria on October 7, 1922 in Laveen, Arizona. Mary, being one of ten children raised by a cotton farmer and a homemaker, had special memories of her parents and siblings:... View Obituary & Service Information

The family of Mary Carranza created this Life Tributes page to make it easy to share your memories.

Send flowers to the Carranza family.