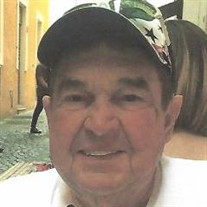 Myron Charles Croel was born on March 21, 1938 in Ionia, Michigan. He passed away October 20, 2019 at Loma Linda Hospital in California. He is survived by his wife Debbie; daughters Brenda Rockafellow and Casey Porter and son Ben Croel; grandchildren Garrett (Magda) Rockafellow, Sam (Bre) Rockafellow, Will and Jake Porter, Curtis Croel (Margarita) and Curtis’s daughter Coraline; stepdaughter Christine Cecil and children. Tinsley (Noah) and Tinsley’s son Maverick,CJ, Darren; stepdaughter Roxie ( Mike) McNabb and children Clayton, Matthew, and Ella. He is also survived by his sister Carolyn (Gary) Graham and a niece Cynthia (Jeff) Foura and their children Brennan, Nathan and Carissa; niece Angela (Dan) Malinowski and their children Kristina and Tyler. He was preceded in death by his parents Charles and Lula Croel and younger brother Gary Croel. Myron grew up in Michigan and graduated from Ionia High School in 1955. He joined the army and served in Korea as a M.P. After the military he attended Davenport University in Grand Rapids MI. Shortly thereafter he started his 50 plus year career with Culligan Water. Through his life, he owned three different Culligan franchises and earned many top performance awards. Myron worked very hard to provide for his family and played just as hard. He flew as a private pilot and loved his plane. His passion for off-road racing eared him the Nissan Cup Championship in 1984. He is considered a “Legend” and will greatly be misses in the racing community. He had a checkered past under the checkered flag-red cup in hand with a big smile on his face. He loved everything including but not limited to cars, motorcycles, airplanes, boats, jet skis, hunting, golfing, shuffleboard, RV’s and partying. He was a devout republican and attended both the Trump Inauguration and the Woman’s March on Washington. Many, many people loved Myron. He had countless friends. He was renowned for his kindness and generosity, and for playing “Santa” every year for less fortunate children. He loved life and lived it to the fullest. A celebration of life will be held at Silver Lakes Clubhouse on 27801 Mountain Springs Road in Helendale, California at 1:00 p.m. on Sunday the 27th of October. Another celebration is planned for November at Croel Deer Camp in Michigan. Please join us for a toast to Myron.

Myron Charles Croel was born on March 21, 1938 in Ionia, Michigan. He passed away October 20, 2019 at Loma Linda Hospital in California. He is survived by his wife Debbie; daughters Brenda Rockafellow and Casey Porter and son Ben Croel; grandchildren... View Obituary & Service Information

The family of Myron Charles Croel created this Life Tributes page to make it easy to share your memories.

Send flowers to the Croel family.