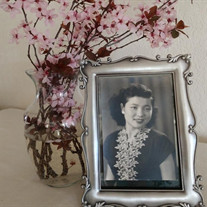 Nobuko Masuse Mosell, 91, passed away peacefully at rest in her Victorville residence on Feb. 23, 2020 after receiving final words of love, peace, and gratitude from sons, daughter, and granddaughter gathered at her bedside. Nobuko was born on May 29, 1928, in Uchide, Japan, the youngest of five brothers and two sisters. Her parents were Sueno Masuse and Kakujiro Shirai. In Japan in the post World War II era, Nobuko attended college studying home economics, where she learned to skillfully and artistically prepare dishes, design flower arrangements, crochet decorations for the home, manage home finances, and sew every manner of clothing. It was after she opened a tailor shop on an Army military base, that she found success as a young businesswoman, mending or sewing on new rank patches for American soldiers. There she met her future husband, Army serviceman Oris Edward Mosell. They were married on Dec. 28, 1950, in Kobe, Japan. Throughout the travels of her life as a military wife, from California to Washington state, Germany, North Carolina, and finally returning to California, Nobuko gave her family love and care by creating beauty in her home and kindness in her heart. She was devoted to raising her children, but also enjoyed her work in the restaurant field, where she was much appreciated. Nobuko was preceded in death by her husband on Oct. 8, 2010. She is survived by her daughter, Deanna Mosell of Apple Valley; son Dana Mosell and daughter-in-law Laura of Rancho Cucamonga; son Glenn Mosell and daughter-in-law Mikki of Eagle, ID. Additionally, Nobuko is survived by seven grandchildren; Miya Tischler, Demetra James, Chandler Powell, Bradley Mosell, Kylie Mosell, Tamber Mosell, and Jasmin Taitano; and seven great-grandchildren. She is also survived by a nephew, Yoshio Shirai of Japan. A Celebration of Life Memorial Service will be held Sunday, Apr. 5, 2020 from 1-3 p.m. at the Hi-Desert Center for Spiritual Living, 18575 Corwin Road, Apple Valley, CA 92307. All are welcome to attend. “The perfect blossom is a rare thing, yet one was here for us.”

Nobuko Masuse Mosell, 91, passed away peacefully at rest in her Victorville residence on Feb. 23, 2020 after receiving final words of love, peace, and gratitude from sons, daughter, and granddaughter gathered at her bedside. Nobuko was... View Obituary & Service Information

The family of Nobuko Masuse Mosell created this Life Tributes page to make it easy to share your memories.

Nobuko Masuse Mosell, 91, passed away peacefully at rest in her...

Send flowers to the Mosell family.