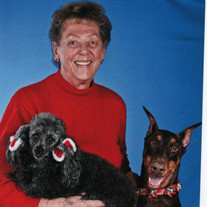 Patricia Ann (Heil) Cox Patricia Ann (Heil) Cox went home to her Lord and Savior Jesus Christ in the early morning hours of Saturday, July 15, 2017 with her daughter Cynthia Molle and good friend Kathy Boberick at her side. She was greeted by her parents Guy F. Heil and Mable E (Rummel) Heil, our beloved cousin Sallye Lou (Graves) Steele, and many others who had already made their journey home. She spent considerable time at the Rainbow Bridge greeting all of our 4 Legged Angels (Tiny, Hansel, Heidi, Doopie, Czar, Dolly, Houston, Audi, Gretzky, Hailey, Daisy, Penny, and Axel. They were all glad to see her again and welcomed her with open hearts and paws, and many kisses. Born in Omaha, Nebraska, on March 2, 1935, she moved to “beautiful downtown Burbank” when she was in grammar school. While attending Burbank High School, she was a member of the majorette squad. She worked in the automotive industry (dealerships and auto dismantler) until she made the move to Redlands Community Hospital. She started in Utilization Review, moved to Medical Records, back to Utilization Review as the Director, and then to Quality/Medical Staff. As a member of that department, she was the CME Coordinator, and her dedication to this program consistently earned it the highest (4 yr) accreditation. She made many life friends with the medical staff, her coworkers, and administration. After her professional career ended, she moved to the Sun City Apple Valley Del Webb community. She was a member of the Finance and Safety Committees and regularly attended Board meetings. On the Safety Committee, she was instrumental in maintaining the Neighbor to Neighbor program, welcoming new residents. Having been through the North Park, Panorama, and Gilman Ranch fires, and the Landers earthquake, she was an avid Emergency Preparedness advocate. She successfully completed her Community Emergency Response Team (CERT) training, and acquired her Disaster Service Worker (DSW) credential. She leaves her daughter Cynthia J. Molle (Apple Valley), her son Guy H. Cox (Victorville), her adopted daughter Beth A. Wilhite (West Point, CA), a granddaughter Larissa A. (Cox) Coburn, and a grandson Ryan A. Cox, along with 4 great grandchildren, and far too many friends to name. She is already missed, but her family and friends are sure that she is now a guardian angel watching over all of us. Services are currently being planned. In lieu of flowers, please consider donating to UC Davis Companion Animal Memorial Fund or the Doberman Pinscher Club of America Rescue.

The family of Patricia Ann (Heil) Cox created this Life Tributes page to make it easy to share your memories.

Send flowers to the Cox family.