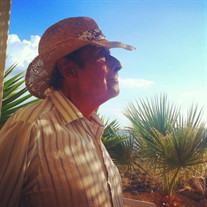 Pete Torres Delgado, 90, of Anza, California passed away peacefully on May 24th, 2017 surrounded by his family. Pete was born April 9th, 1927 to the parents of Pedro and Josesa and was raised in Olive Heights Orange, California. He joined the United States Navy at the young age of 18 and served in World War II until 1947. He married his lovely bride, Lorraine Pena in 1958, a marriage of 58 years. They began their family in Olive Heights Orange, California where they raised their two boys, Peter and David. He lived most of his life in Orange County and Anza Valley where he was a fence contractor and had an outstanding work ethic. He was always working around the house, taking care of his plants, or building something new that would improve the house. He loved to have a good time, joke around, gardening, dancing, and watching his novellas, news and western movies while eating butterscotch candies, in his past time. If you knew him, then you know he loved and enjoyed his grandchildren and great grandchildren who were his pride and joy. They knew him as Papa or G-pa. Pete is survived by his loving wife Lorraine, children Peter and David, daughter in law Pam, four sisters Cecilia Bravo, Jesse Rodriquez, Eluteria Cruz, Mary Jaime and one brother Oliver Delgado, six grandchildren Peter Jr, Anna, Brittney, Ciera, Tandra , Shelby and six great grandchildren Aubrey, Jenessa, Mia, Sadie, Ava and Brody. His father Pedro and mother Josesa , sister Praxediz Olmedo, and daughter in-law Anita Delgado precede him in death. He will be greatly missed, but will live on in our hearts forever. A memorial service celebrating his life will take place on June 8th, 2017 at 10:00 am, Sunset Hills Memorial Park and Mortuary, 24000 Waalew Road, Apple Valley, Ca 92307. The graveside service will follow at 2:00 pm, Riverside National Cemetery.

Pete Torres Delgado, 90, of Anza, California passed away peacefully on May 24th, 2017 surrounded by his family. Pete was born April 9th, 1927 to the parents of Pedro and Josesa and was raised in Olive Heights Orange, California. He joined the... View Obituary & Service Information

The family of Pete Torres Delgado created this Life Tributes page to make it easy to share your memories.

Send flowers to the Delgado family.