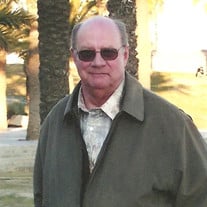 Phillip Michael Burg, age 79, of Apple Valley California, passed away peacefully at home on June 4th, 2018. “Phil” is survived by his beloved wife, Melody, his daughters Shan and Debbie, his three grandchildren, Jason, James and Avery, his two great-grandchildren, Alexandra and Mason and his many nieces and nephews. Phil is preceded in death by his son Dan and his granddaughter Nikki. Phil was born on March 13, 1939 in Dayton Ohio, the seventh of nine children. Phil joined the service right out of high school and served overseas in the U. S. Air Force, before returning to Ohio. Phil met his beloved wife in Dayton, when he was a meat cutter in a grocery store where Melody worked in the pharmacy. Phil and Melody lived in Louisville, Kentucky until they moved to Newberry Park, California in the late ‘70’s. Phil worked as a professional truck driver for Roadway Express and within 2 years moved his family to Apple Valley, California, where Roadway had built a new terminal. The Burgs spent the next 37 years in the high desert where they supported the community, fostered friendships and threw legendary parties. Phil loved to dance with his wife to good old country songs, collect antique clocks and was a big fan of Nascar racing. Phil traveled over a million miles of highway during his career and 15 years ago, retired from Roadway Express. Even in retirement, though, Phil loved to travel; from short trips to Nevada and family vacations in Florida to a memorable trip to Spain with his daughters. Phil Burg is known for his great humor, sense of justice and big heart. Phil would always try to lend a helping hand to someone going through tough times and believed in the importance of treating everyone fairly. Most of all, Phil will be remembered as a loyal friend, proud father and loving husband. A celebration of life will be held on June 19th at 5:30 p.m. at Sunset Hills Memorial Park in Apple Valley California, 2400 Waalew Road, Apple Valley, California, 92307. A reception will follow at Phil and Melody's Residence.

The family of Phillip Michael Burg created this Life Tributes page to make it easy to share your memories.

Send flowers to the Burg family.