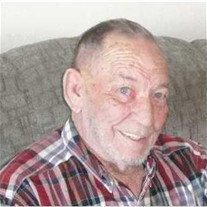 Plez Henry Taylor Wallen (Pee Wee) passed away on October 11, 2018 in his home in Apple Valley, California at the age of 81. Plez is survived by his wife of 63 years, Bernadene Wallen; his son, Timothy Wallen of Lucerne Valley, California; his daughter, Lucinda Lazenby of Apple Valley, California; his son, Jeffrey Wallen of Golden Valley, Arizona, his eight grandchildren, and six great-grandchildren. Plez was preceded in death by his son, Douglas Wallen; his brothers Bradley Wallen, William Wallen, Lawrence Wallen, and Hubert Wallen; his father, Carlos Taylor Wallen, and his mother, Nora Goodman Wallen. Plez was born in Stowe, West Virginia on March 19, 1937. He married the love of his life, Bernadene in West Virginia on July 15, 1955. As a young man, Plez worked washing cars for Darris Motors in Defiance, Ohio before taking a job laying oil pipelines across the United States. He made his way to California in 1960 to visit his brother, Hubert and began what would become his life-long career. Plez enrolled in a carpenter's apprenticeship program and upon completion of his education, he was a proud union carpenter for 58 years. Plez enjoyed showing the freeway bridges, retail stores, restaurants, high rise buildings, apartment buildings, and houses he helped build throughout his career in southern California. It was on his first job as a carpenter that he earned the nickname "Pee Wee" because he was short in stature. Plez lived in Baldwin Park, California until he bought 10 acres in Lucerne Valley in 1972. He decided he wanted to get his family out of the city, so he built a little house, drilled a well, and built a wind generator to charge batteries for 12 volt lighting. Plez had his self-sufficient home long before it was popular to be "off the grid". Living the rural lifestyle became more difficult as he got older, so Plez and his wife moved and spent his last 14 years in his home in Apple Valley. He often joked that he had to move to the city where he could enjoy all the modern conveniences like electricity and air conditioning. Plez was man who loved his family, had countless friends, enjoyed blue grass and old country music, wouldn't go without his morning coffee, and was ready to go to his home in Heaven. "The Carpenter" a poem by G.E. Nordell There was once a master carpenter and he lived a good life for he loved to work, building things of wood. He was loved by his family, by his sons and his daughter, and especially by his wife. He was loved by everyone who knew him. And at the end of that good life when it came time for him to die the old carpenter soared into the white light of death – for the white light is where the good souls go to. And the white light warmed him and nurtured him and fed him great peace. And when this carpenter arrived in heaven he was expected and immediately he was put to work: for the Pearly Gates were a bit loose and St. Peter's desk had a couple of drawers that stuck. And before long the old master carpenter began to build a new throne for God.

Plez Henry Taylor Wallen (Pee Wee) passed away on October 11, 2018 in his home in Apple Valley, California at the age of 81. Plez is survived by his wife of 63 years, Bernadene Wallen; his son, Timothy Wallen of Lucerne Valley, California;... View Obituary & Service Information

The family of Plez Henry Taylor Wallen created this Life Tributes page to make it easy to share your memories.

Send flowers to the Wallen family.