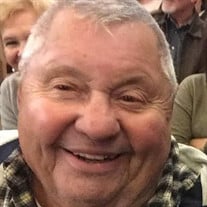 Richard Bernard Peterson (Pete), 87, of Lucerne Valley California, passed away peacefully at his home surrounded by family and friends on Wednesday May 11, 2016. Pete loved his country, the United States Navy, and his family. He was born on March 23, 1929, in Chicago Illinois, the son of Truman B. and Louise C. Peterson. Pete was raised in Chicago Illinois. He attended Union Ridge High School and was a graduate of Victor Valley College making the Dean’s list semester after semester. Pete met he wife Clarice at a VFW dance when he was stationed in Milwaukee Wisconsin. They married on June 16, 1956 and their dance lasted sixty-years. Pete joined the United States Navy at seven-teen years old and sailed off into an adventure of a lifetime. He would spend years traveling the world and serving his country in four major conflicts- World War II, Korea, Vietnam, and the Cold War. Pete earned recognition for outstanding service promoting peace and stability for this Nation, but was especially proud of his involvement in the naval engagements during the Cuban Missile Crisis. He served as a Chief Signalmen on the bridge of Destroyers and Air Craft Carriers on both the Pacific and Atlantic Fleet. Pete retired from the United States Navy in San Diego on April 16, 1976 after thirty years of service to his country. He then moved his family from San Diego to the High Desert to build a home and start the Peterson Anchor Ranch. The Peterson family has called the ranch home for nearly forty years. Pete and his wife Clarice spent their summers traveling the United States visiting friends and family and attending the ship’s reunions. Pete was an avid fisherman and spent the dog days of summer on Blackduck Lake with a reel in one hand and a cigar in the other. Although Pete traveled the world his heart was ever loyal to the sport teams of his hometown the Chicago White Sox and the Chicago Bears. He would be so excited for the great start the Sox already have this year and would probably say, “They could take it all the way if they don’t blow it”. A cold beer, a Chicago Dog, and popcorn were always his favorite way to enjoy a ball game. We are blessed to have learned many valuable lessons from Pete in his eighty-seven years, among them, Pete believed that if you were not having a good time it was your own fault and you should always work a job you love having a passion for life. He was the best storyteller we ever knew. Mostly because he never told a tale the same way twice and loved to embellish the details. He made everyone his friend. He was one of a kind and we will miss him dearly. Pete is survived by his loving wife Clarice; children Mary (Bob) Rehak DeKalb, Illinois, Richard Peterson Escondido California, and Ellen (Dennis) Burke Apple Valley, California; grandchildren Cassandra (Chris) Beary St. Charles, Illinois, Robert (Tara) Rehak DeKalb, Illinois, Josh (Elizabeth Jilek) Rehak Chicago, Illinois, Richard Peterson Escondido, California, Brianne Rehak DeKalb, Illinois, McKayla Peterson Escondido, California, Reece Burke and Morgan Burke Apple Valley, California; great grandchildren Taylor, Robert and Owen Rehak, numerous loving nieces and nephews and his pet Inky (Pug). He was preceded in death by his parents and brother. Please join us in wishing Fair Winds and following seas to the Chief. Funeral services will be on Thursday May 26, at 11 am at St. Paul’s Catholic Church in Lucerne Valley. Internment and full military honors will directly follow at Lucerne Valley Memorial Cemetery. The family would like to invite all Military personal past and present. You are encouraged to wear full uniform dress to celebrate the life of service to this decorated military veteran In lieu of flowers, memorials can be made to the Wounded Warriors Project. https://www.woundedwarriorproject.org/donated Warriors project.

Richard Bernard Peterson (Pete), 87, of Lucerne Valley California, passed away peacefully at his home surrounded by family and friends on Wednesday May 11, 2016. Pete loved his country, the United States Navy, and his family. He was born on... View Obituary & Service Information

The family of Richard Bernard Peterson, Sr created this Life Tributes page to make it easy to share your memories.

Send flowers to the Peterson family.