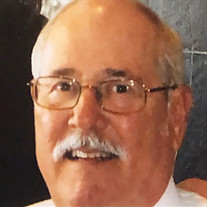 Richard Solorio 4/22/1945 - 7/7/2019 Richard passed away peacefully, at home with family by his side on July 7, 2019. Major Richard Solorio (USAF Ret.) was born April 22,1945, in Los Angeles, CA. Richard graduated from James A. Garfield High School in Winter 1963 and was honored as an Ephebian. Richard attended East LA College, transferred to UCLA and earned a BS in Chemistry in 1966. Richard was commissioned by the United States Air Force in 1967 and married his high school sweetheart, Sayoko (Susan) in 1968. Richard proudly served his country as an Aircraft Maintenance Officer and retired from active duty in 1987, at George AFB. After a 20 year military career, Richard worked for Northrop Grumman for 10 years where he completed the CalTech Systems Engineering Program. Richard and Sayoko celebrated their 50th wedding anniversary in 2018. In his retirement, he enjoyed numismatics, UCLA athletics, BMWs, and Angels baseball. Richard will be remembered by all who knew him as a loving and generous man. Richard was preceded in death by his parents, Alfred and Drucilla; and his brother Daniel. Richard is survived by his wife, Sayoko, sons, Eric and Mark (Becky), brother, Arthur, nephew, Paul, niece, Maria and granddaughters, Allisah and Ashleigh. Richard will be laid to rest at Sunset Hills Memorial Park in Apple Valley, CA. In lieu of flowers, Richard requested that donations be made to the American Cancer Society.

The family of Richard Solorio created this Life Tributes page to make it easy to share your memories.

Send flowers to the Solorio family.