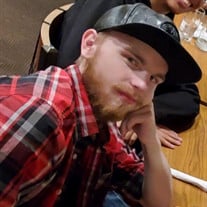 Samuel Caleb Byers was born on October 27, 2001 at Desert Valley Hospital in Victorville, CA to Jeff and Kerry Byers. Sam stepped into Heaven, on October 23, 2021, at Antelope Valley Hospital in Lancaster, CA. Sam is survived by his parents, Jeff & Kerry; his brothers, Daniel Byers, Joseph Dawson and Joshua Byers; sisters, Elizabeth Byers and Sarah Byers; sisters in law, Emma Byers, Callista Dawson and Brieann Byers. He is also survived by his nephews, Ryan Byers, David Byers, Ryder Dawson, Lucas Byers and Logan Byers; one niece, Evie Dawson; as well as numerous aunts, uncles and cousins; and one cat, Kira. Growing up Sam enjoyed playing video games with friends, as well as taking classes & playing sports in PSP Sports And More-now called PSP Christian School. He enjoyed, baseball, basketball, flag football, archery, soccer, self defense, and anything else that he could be competitive in. He also enjoyed camping, hiking, and backpacking with his dad. Music was an interest and talent for Sam. He played piano & drums & played the drums for several church worship teams. He also played Amal in “Amal and the Night Visitors” - an opera- at a young age. He was involved in break dancing and his latest skill was beat boxing. As a teenager, he turned his love for soccer and music into jobs as a referee for the Storm Soccer League and an drum instructor at The Byers Music Room. At 16, he went to work for Church of the Valley in their Maintenance department which enabled him to pay cash for his first car, a Mustang, by age 17. Sam graduated high school with straight A’s from Victor Valley Desert Christian School in 2019. Sam impacted people wherever he went; not just his family and friends, but also everyone who met him, and definitely his nephews and niece. He was the life of the party, had a contagious laugh and a personality that drew people towards him. While we are left with a very large hole, we have such great memories of Sam, his life and the legacy he left behind in all of the people he impacted. The most important decision Sam ever made in his life was saying, “yes” to Jesus Christ as his Savior and Lord. It is this precious promise of eternity with Jesus and being reunited with Sam again someday that remains our peace and hope. “If you openly declare that Jesus is Lord and believe in your heart that God raised him from the dead, you will be saved.” Romans 10:9

The family of Samuel Caleb Byers created this Life Tributes page to make it easy to share your memories.

Send flowers to the Byers family.