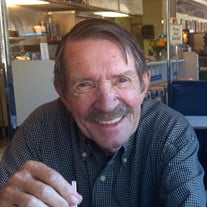 Stanley (Stan) M. Dearden, after battling several illnesses, passed away peacefully at home In Bullhead City, AZ. attended by his beloved family, on November 5, 2016. Born July 14, 1942 in Loon Lake, Saskatchewan, Canada. Stan grew up in Canada moving to Seattle, Washington in 1962 where he met the love of his life, Denice Brown. Married 52 years, they were wed in Reno, Nevada. Stan served in the Army from 1965-1968. In 1965, Stan and Denice were stationed in Germany. In 1968 after separation from the Army they moved to Apple Valley, CA. Stan worked for Contel, opening Stan’s Telephone Service in 1979 serving the Victor Valley until he and Denice retired in 2006, taking to the road to travel across the country. Along with his wife, Denice, Stan is survived by his daughters, Darcey Dearden and Diane Dearden Anastasi, (Victor); grandchildren, Victor Matchie II, Logan, Bella and Nicky. Also, leaving a sister, Donna, (Cletus) and many nieces and nephews. Safely in the Lord’s arms, Stan will be deeply missed by his family and many friends. Services will be held on Saturday, November 12th at 1 pm at Sunset Hills Memorial Park in Apple Valley.92307

The family of Stanley Martin Dearden created this Life Tributes page to make it easy to share your memories.

Send flowers to the Dearden family.