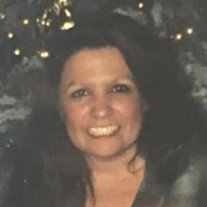 It is with great sadness that we announce the passing of Virginia (Ginger) Shaffer, our loving mother and friend to whose lives that she has touched. She left us peacefully at her residence in Victorville, California on November 4, 2019 at the young age of 63 years old. Born in Inglewood, California, Ginger was a sibling of 6 brothers and sisters. She was the daughter of beloved, Ronald and Frances Dunn (Robert Estridge). Ginger grew up in the South Bay neighborhood of Torrance, California. As a young girl, she loved to play with her brothers and sisters riding bikes, roller skating and going Hermosa Beach. While attending North High School in Torrance she met and married Alex Shaffer. Shortly after, they welcomed a son, Alex and a daughter, Tanya. A few years later, they moved on from Carson, California to East Long Beach, California. While in Long Beach, Ginger had a successful career and worked in outside sales and health administration. She managed many employees and teams and always exceeded her job quotas and job expectations. Her hobbies included hand modeling as she was known for having the most beautiful long hair and stunning hands and nails. She enjoyed make-up, fashion and Gucci purses. Ginger was also a very loving and compassionate mother and friend. She always invited the neighborhood kids over for sleep overs, pool parties and was very much a part of a lot of kids’ childhoods. She was a great cook and was known for her famous fudge that most of the family cannot duplicate. Ginger loved being with family and loved family gatherings. Thanksgiving and Christmas were her favorite holidays because the holiday spirit represented the joy and love she had for her family. She will be dearly missed but never forgotten. While we lost a wife, a mother, a sister, a grandmother and a friend, heaven has gained an angel and we know that she will be watching over us and she will be by our sides. Ginger is survived by her husband, Alex Shaffer of Victorville, California. Son, Alex Shaffer of Orange County, California. Daughter, Tanya Louthan of Orange County, California. Son in Law, Robert Louthan of Orange County, California and her only grandchild, Kylie Louthan of Orange County, California. Sister, Sharon Lee of Trout Lake, Washington. Brother, Michael Estridge of Lake Havasu, Arizona. Sister, Patty Humphrey of Rolling Hills, California and Sister, Linda Webster of San Pedro. Ginger also had brother and sister in laws, Casey Lee, Bob Fritz, Doug Webster, Carol Dunn and Marsha Estridge. Lastly, she will be missed dearly by her nieces and nephews as she loved and adored each and every one of them.

It is with great sadness that we announce the passing of Virginia (Ginger) Shaffer, our loving mother and friend to whose lives that she has touched. She left us peacefully at her residence in Victorville, California on November 4, 2019 at... View Obituary & Service Information

The family of Virginia Shaffer created this Life Tributes page to make it easy to share your memories.

It is with great sadness that we announce the passing of Virginia...

Send flowers to the Shaffer family.