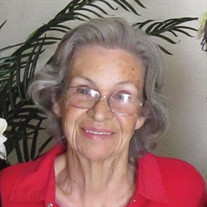 Vivian Irene Pitsinger, age 80 of Apple Valley, CA passed away Wednesday January 9, 2019 from Alzheimer’s disease. She was born to the late Miles Tenney and Irene Trinkle on May 25, 1938 in Huttonsville, West Virginia. Vivian attended Kent Roosevelt High School in Kent, Ohio where she graduated Valedictorian then married her high school sweetheart Robert Pitsinger Sr. She was part of the Eastern Stars for many years. She had 5 children Robert Jr, James, Gary, Kimberly, and Mark. After raising these children at the age of 50 she returned to school to fulfill her life long dream of becoming a registered nurse. She graduated from Penn State University School of Nursing in 1989. During her nursing career she worked at Town Hall Estates and Blossum Hill Nursing Home in Ohio where she loved her patients. She served as a Director of the Rehabilitation Unit at the end of career where she was most passionate about caring for the Alzheimer’s and dementia patients. Upon retirement in 2001, Robert and Vivian moved to California where the majority of their children and grandchildren resided. Vivian loved watching her children and grandchildren playing sports, never missing an event. She also enjoyed her flowers and especially her roses. Her green thumb was amazing. Her gentleness and loving personality made her loved by all. Vivian was preceded in death by her Mother: Irene, Father: Miles, Step Fathers: Elmer and Professor, Brother: Dick, Son: James and Son in Law: Kenneth. Vivian is survived by her loving husband of 62 years, Robert, Brother Bud: (Connie) Sons: Robert Jr, Gary(Stephanie) and Mark (Trish), Daughter: Kimberly(Lonnie) , and grandchildren: Nicholas, Katie(Zack), Jacob, Kinsey, Kyle, Wesley, and Mason. Her memorial services will be held at her daughter’s residence on January 28th at 1pm. The family asks in lieu of flowers that donations be sent to the Alzheimers [email protected] https://alzfdn.org/support-us/donate/ to help stop this horrible disease.

The family of Vivian Irene Pitsinger created this Life Tributes page to make it easy to share your memories.

Send flowers to the Pitsinger family.