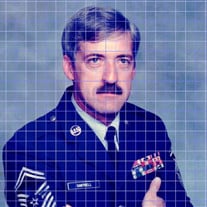 Walter Benson Cantrell, age 77, went to be with the Lord on Tuesday March 23, 2021 after a five year battle with ALS. He fought the good fight with a determination to walk again but the Lord saw fit to heal his earthly body in Glory. He passed peacefully at home with his beloved, Rosemary, close by. Walter B. was born on November 14, 1943 in Falling Rock, West Virginia to Orville and Addie Cantrell. Hewas the youngest boy in the family of seven children. He graduated from Clay County High School in 1962. He enlisted in the United States Air Force on June 15, 1966 and was assigned to Shaw Air Force Base in Sumpter, South Carolina. Shortly after he was sent to Viet Nam in 1968-1969. An assignment to Loring AFB in Maine followed and Walt was seriously thinking about getting out of the Air Force after his first four year enlistment. He came home and married Rosemary Zimmerman on December 2, 1969 and decided to re-enlist with his new bride, a baby in arms and a follow on to George AFB in Victorville, CA. Walt loved his F4 days on the flight line and there he made lifelong friends. It was during these years, Walt and Rosemary added four children to their family. In the summer of 1975, the family left for an overseas assignment to Torrejon AFB Madrid, Spain. Three years went by and the family packed up again and moved back to the states to Plattsburg AFB, in upstate New York. From there, Walt was given a remote assignment to King Salmon, Alaska. He packed the family up and moved back to George Air Force Base where he would retire having a decorated 24 year military career and achieving the highest rank of Chief Master Sergeant. He loved his Air Force career and will forever be remembered as “Chief”. After retirement, Walt went to work at his second career at Northrup Grumman where he had the privilege of being part of the B-2 Stealth Bomber program. Everyone that met him, knew he loved that plane! He also loved all the grandchildren that were born during this time and had a blast being Papa Walt. In addition, Walt was a member of Redeemer Church, where he loved welcoming everyone. He took his job as head usher as a true ministry to others. Often times people would say, “Walt was the first to welcome me!”. He was also a member, and for a time, President of the Victor Valley British Car Club where he proudly showed off his Triumph TR-6. His favorite outing with the club was driving down 7th St. in the Victorville Christmas parade every year. He loved when some of the grandkids could ride along too! He also loved singing karaoke at Viva Maria’s and was allowed to open the show as “Walter Cash” always singing Ring of Fire. He really knew how to get a crowd involved and was a great showman. He was also quick to pick up his guitar and call or visit to sing Happy Birthday to friends and family. Walt never met a stranger and was an amazing husband, father, grandfather and friend and lived out his faith and love for Jesus with his kindness and generosity. He always had a joke to share andloved making people laugh. His greatest joy in life came from time spent with his family, singing, and watching Jeopardy and Family Feud. Walt is survived by his wife of 51 years, Rosemary and their children Steve Cantrell of Apple Valley, California, Sonya Jones of Hurricane, West Virginia, Laura Franke (Matt) of Derby, Kansas and Sherri Cantrell of LaQuinta, California.Sisters: Lorena Showalter of Elkview, West Virginia, Shirley Moore of St. Albans, West Virginia and Wanda Ammons of Westfield Circle, Ohio.Grandchildren: Heather Maddox, Steven Cantrell, Hunter Jones (Rebekah), Makena Rust (Brady), Owen Cantrell, Marah Franke, Ethan Cantrell, Evan Franke, William Cassady, Kylie Cassady, Kristin Arnot, and Marley Wehrmann. Walt is proceeded in death by his parents Orville and Addie Cantrell and his three brothers, Jack, Basil, and Billy Cantrell.Visitation will be held on Monday, April 12th from 4-8 pm and a memorial and graveside service will be held on Tuesday, April 13th at 9am at Sunset Hills Memorial Park 24000 Waalew Rd, Apple Valley, CA 92307. In lieu of flowers, please make a donation in Walt’s honor to The ALS Association, Golden West Chapter PO Box 565, Augoura Hills, Ca 91376-0565 or Paralyzed Veterans of America PO Box 758589, Topeka, Kansas 66675-8589.

Walter Benson Cantrell, age 77, went to be with the Lord on Tuesday March 23, 2021 after a five year battle with ALS. He fought the good fight with a determination to walk again but the Lord saw fit to heal his earthly body in Glory. He passed... View Obituary & Service Information

The family of Walter B. Cantrell created this Life Tributes page to make it easy to share your memories.

Walter Benson Cantrell, age 77, went to be with the Lord on Tuesday...

Send flowers to the Cantrell family.