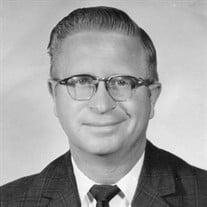 Wilfred (Bill) Peirson passed away at the age of 86 following a brief illness. He is survived by his wife of 56 years, Donna; his son Rob of Irvine, CA; daughter Susan (Matthias) Bates of Clearwater, FL; daughter Julie (Ken) Symons of Honeoye Falls, NY; grandchildren Jordan Bates, Taryn Bates, Becca Bates, and Ryan Symons; and was “Uncle Billy” to many nieces and nephews. He was predeceased by his parents Wilfred R. and Erma Peirson, brother James Peirson, sister Doris Dye, and son Thomas Steven Peirson. Bill graduated from Burroughs High School in 1948 and was active in many sports and the student council. A popular student, known as “Burro Bill,” he stayed connected with many of his classmates over the years. A Korean war veteran, Bill served in the United States Army artillery unit. Following the war, he graduated from UC Berkeley with a Civil Engineering degree. He met Donna Harris in San Francisco, and they were married on June 18, 1960. He worked for several grading and paving construction companies, where his specialty was in estimating. He later retired from Cooley Construction as vice president in 1998. Always the dreamer, Bill had big ideas and was adventurous in his endeavors. In 1964, he ran a local western attraction called Dead Man’s Point, located in Apple Valley, CA. In 1969, he moved his young family to Australia, traveling by ship, to look for new work. Returning back to the States a short time later, the family moved around to various California towns before permanently settling in the Victor Valley area in 1974. He was very proud of his children, always encouraging them to follow their dreams. He adored his grandchildren, who affectionately called him “Bapa,” and was able to spend a lot of time with them during their childhood. Bill was ahead of his time, remodeling homes for resell in the 1970s and 1980s. His personal business cards carried the tagline, “Contractor, Builder, Engineer, Estimator…And All Around Good Guy!” He took great pride in building his dream home, where he lived since 1979. He was always willing to welcome visitors to the house, giving tours to those who marveled over the unique and expansive layout. He loved trains and oceans, taking many cross-country Amtrak trips and cruises to Panama Canal, Alaska, Catalina Island, and the Mexican Riviera. Unknown to many, Bill was a songwriter and composed many songs based on his love of big band music. A Graveside Service will be held at Sunset Hills Memorial Park and Mortuary on Saturday December 03, 2016 starting at 2:00 PM

Wilfred (Bill) Peirson passed away at the age of 86 following a brief illness. He is survived by his wife of 56 years, Donna; his son Rob of Irvine, CA; daughter Susan (Matthias) Bates of Clearwater, FL; daughter Julie (Ken) Symons of Honeoye... View Obituary & Service Information

The family of Wilfred (Bill) Peirson created this Life Tributes page to make it easy to share your memories.

Wilfred (Bill) Peirson passed away at the age of 86 following...

Send flowers to the Peirson family.