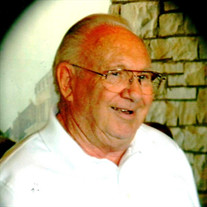 William (Bill) Thomas Monteith was born on September 1, 1930 in Port Arthur, Ontario, Canada. He left the earth for heaven on November 25, 2018 in Apple Valley, California. Bill is preceded in death by his wife- Shirley, his son- Doug and his Grandson- Jason. Bill met the love of his life, Shirley, in the winter of 1947 at a dance in Port Burwell, Ontario, Canada. They loved going to dances together whenever a big band would come to play. They married on August 18, 1948 and started their family.. Bill started working at the age of 10 in a grocery store bagging potatoes. He then went on to be a butcher and worked in the grocery business until he and his family moved to California in 1961. When he moved his family to California, he started working for Gerber Baby Foods until retirement in 1990. Once he retired, they purchased their first Lazy Dayz Motorhome and their adventures expanded with a group of cherished friends traveling all over the United States and Canada. Bill was a huge hockey fan and enjoyed watching any game that was on TV. Bill enjoyed a good meal around the table with his family or his usual Thursday lunch at Sizzler with his friends. He was the biggest fan of his family and vice versa. He enjoyed going to any school, band or sporting event for his children and grandchildren and would light up watching these events. He was whitty and loved life. Bill was loved by all who knew him and will be deeply missed. Bill is survived by his daughters Dorothy (Eric) and Shelly (Jeff) of Las Vegas, Nevada. Daughter Barbara (Jim) and Daughter-in-law Ronda of Apple Valley. 9 Grandchildren and 16 great-grandchildren. We all have a huge void in our hearts with the passing of this amazing man, but knowing that he is back dancing in heaven with the love of his life gives us all peace. The family would like to thank all of the doctors, nurses and CNA’s of St Mary Medical Center, Victor Valley Global Medical Center, Loma Linda, Dr. Wang of Redlands and Charter Hospice for the love and care that was given to him over the course of the past few years. Funeral services will be held Friday, December 7 at 11:00 a.m. at Sunset Hills Chapel, 24000 Waalew Road. in Apple Valley. Burial will follow at Sunset Hills Memorial Park. In lieu of flowers, please send monetary donations in honor of William Monteith to Steven’s Hope For Children at 1014 W Foothill Blvd, Upland, CA 91786 or you can donate online at https://stevenshope.org/support-us/

William (Bill) Thomas Monteith was born on September 1, 1930 in Port Arthur, Ontario, Canada. He left the earth for heaven on November 25, 2018 in Apple Valley, California. Bill is preceded in death by his wife- Shirley, his son- Doug and his... View Obituary & Service Information

The family of William Thomas Monteith created this Life Tributes page to make it easy to share your memories.

Send flowers to the Monteith family.